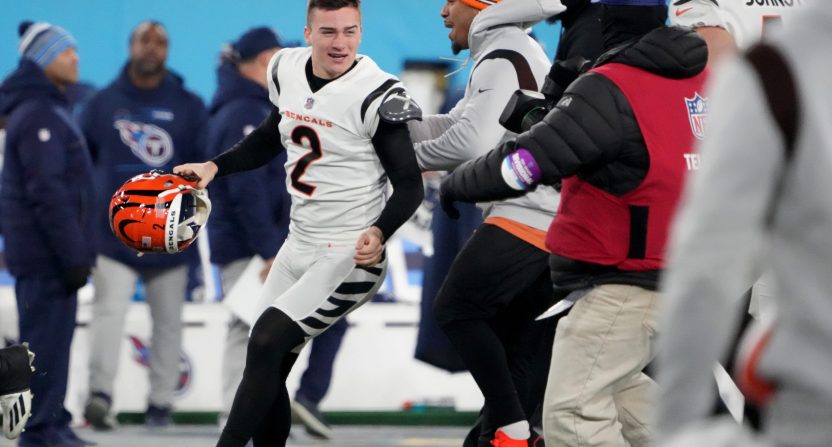 In a game that consisted of nine sacks from one team, three interceptions from the other team, and a one-handed touchdown grab, it was a kicker who became the hero for the Cincinnati Bengals as they defeated the top seed Tennessee Titans 19-16.

Evan McPherson was more than clutch, he was borderline automatic. The rookie kicker from Florida, who was a fifth round pick in the NFL Draft and was a perfect 15 for 15 on the road during the regular season, went 4 for 4 on field goals for the second straight playoff game. His boots from 38, 45, and 54 yards were impressive but his 52-yard game winner was the pièce de résistance.

Last week, the Bengals won their first playoff game in 31 years. Now, they reach the AFC Championship Game for the first time since 1988. While it was a team effort, especially the Bengals defense coming up huge with three picks, it was McPherson’s right foot that got them over the hump. And many praised the kicker for his feat.

Bengals K Evan McPherson said it wasn't really hard to stay cool with the game on the line: "It's my job to stay cool, calm and collected in moments like this."

Rookie kicker Evan McPherson deserves some rookie of the year love too. He's been an asset for the Bengals.

Evan McPherson is one stone cold rookie. Draft pick looks very smart. Wow, Not often you see a team overcome NINE SACKS to win a road playoff game. It takes 3 picks and a poised, tough QB. Burrow to Chase (who else?) make the clutch play. Good for the @Bengals !