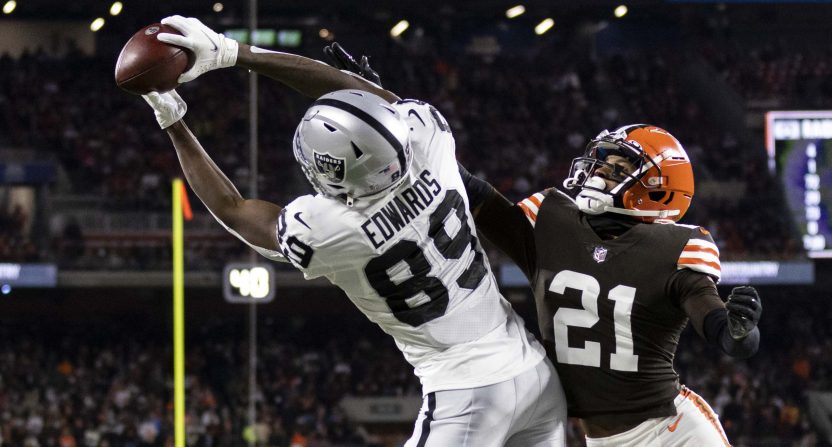 What was a crowded wide receiver room for the Las Vegas Raiders got a little less crowded on Friday. It was reported that the Raiders are trading receiver Bryan Edwards to the Atlanta Falcons.

Vincent Bonsignore of the Las Vegas Review-Journal reported the deal, while Tom Pelissero of the NFL Network added the terms.

Edwards’ departure makes what was already a miserable 2020 NFL Draft class even worse for the Raiders.

The Bryan Edwards trade means the first five picks in the #Raiders' 2020 draft are all gone:

There goes another player from the #Raiders 2020 draft class.

NFL fans liked the move for Atlanta, particularly given the low-risk nature of it.

Worth a late round dart throw. Will compete with Auden Tate for targets behind Pitts and London https://t.co/zVlwLTiFP8

Edwards played in 16 regular season games for the Raiders in 2021, starting 12 of them. He caught 34 passes for 571 yards with three touchdowns. In Las Vegas’ postseason loss to the Cincinnati Bengals, Edwards caught three passes for 41 yards.

With the Raiders, Edwards was part of one of the deepest receiver groups in the NFL. Hunter Renfrow had over 1,000 yards receiving for Las Vegas during the 2021 season. In the offseason, the Raiders added star Davante Adams and recently picked up Keelan Cole. With that group, along with tight end Darren Waller, Edwards was going to have a hard time getting targets, or even finding the field.

That won’t be as much of an issue in Atlanta. The Falcons used the No. 8 overall pick on Drake London, so he’ll certainly be on the field. But Edwards should have a chance to battle Auden Tate for the No. 2 job. And with London and tight end Kyle Pitts likely drawing most of the attention from opposing defenses, the No. 2 receiver should see plenty of opportunities to catch passes.