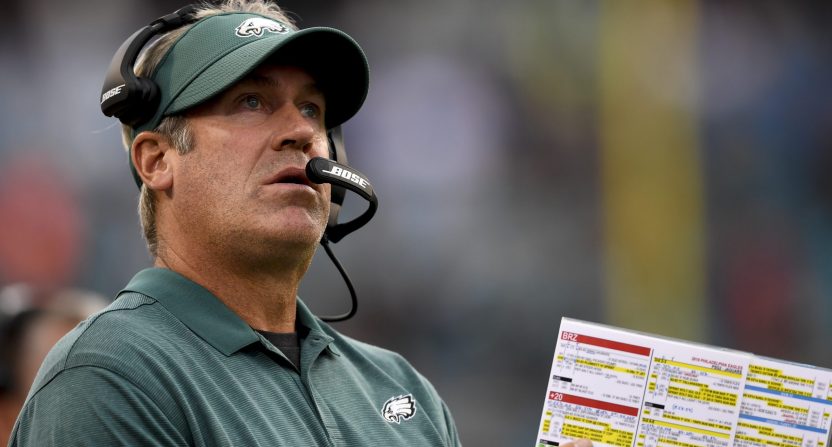 The Jacksonville Jaguars‘ (clown show) search for a head coach — replacing the disaster that was Urban Meyer — has finally come to an end.

Just hours after it was reported that Tampa Bay Buccaneers offensive coordinator and former Jacksonville quarterback Byron Leftwich was removing his name from consideration for the job (after being viewed as the favorite), the Jaguars have chosen Doug Pederson to be the new head coach.

Jacksonville made the news official on Thursday night, shortly after reports of the agreement emerged:

ESPN’s Adam Schefter adds that Pederson and quarterback Trevor Lawrence — who will enter his second season in 2022 — already spoke on the phone on Thursday evening to discuss their future together.

New Jaguars’ HC Doug Pederson and QB Trevor Lawrence spoke on the telephone earlier this evening, before Jacksonville hired its new head coach. The two already were discussing their future together.

As Schefter notes, Pederson was actually the first candidate the Jaguars spoke to about the job.

Doug Pederson was the first head-coaching candidate that the Jaguars interviewed after they moved on from Urban Meyer; he started first and finished first.

Earlier on Thursday, Pederson and Rich Bisaccia — who served as the Las Vegas Raiders’ interim head coach following Jon Gruden’s exit were rumored to be the leading candidates for the job.

After a chaotic, and frankly embarrassing coaching search from the Jacksonville front office, the Jaguars actually landed on a Super Bowl-winning coach, and one that could particularly be a good mentor for the highly talented Lawrence.

Here’s some reaction to the hiring from the football world:

… League sits at 0-for-6 on the diversity front.

I’m told as this news is being reported on twitter that Doug Pederson is being hired as the Jaguars new head coach, other candidates who’d interviewed for the vacancy had yet to be specifically informed, per league sources.

Doug Pederson is the perfect coach for the @Jaguars at this time.

Having said all that: Doug Pederson winning a Super Bowl with a backup QB against the best coach and quarterback of all time is one of the best coaching jobs in the modern era of football and I am hoping he saves Trevor Lawrence's career and gives Jags fans some good times.

The #jaguars get clowned a lot and I get it, lotta unforced errors. But unless Doug Pederson is in jail right now and no one knows it, this hiring is really smart by them.

Pederson’s a good hire for the Jags — their process was… weird, but they ended up landing a pretty good head man.

What does this mean for Rich Bisaccia though? Hopefully a spot running Chicago’s special teams 😬

Everything we said about Urban Meyer one year ago will be the same for Doug Pederson:

There are things to like in Jacksonville. Just needs some structure and stability upstairs.

Pederson can help Lawrence. He also has major work to do in that locker room after Urban Meyer mess. RT @AdamSchefter: Former Eagles’ HC Doug Pederson is being hired as the next head coach of the Jacksonville Jaguars, source tells ESPN.

If Doug Pederson knows the name of 3 Jaguars at his first press conference, he'll be ahead of Urban Meyer's curve

The Eagles get to play Carson Wentz and Doug Pederson next year. Love it.