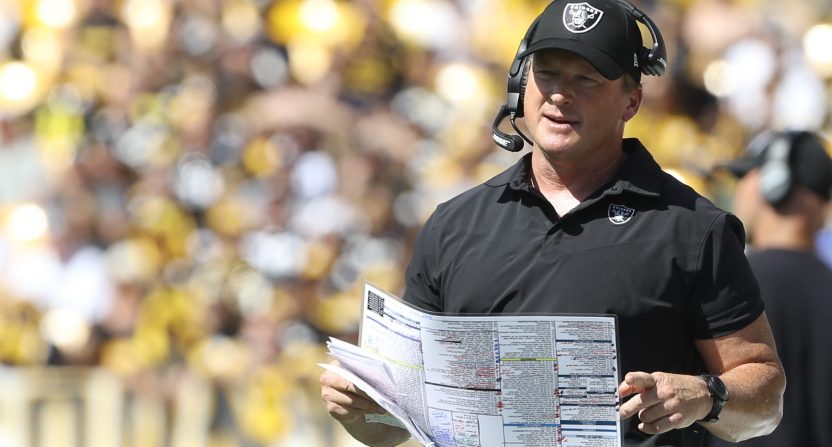 Jon Gruden resigned as head coach of the Las Vegas Raiders on Monday night, shortly after The New York Times published a summary of offensive emails Gruden sent — while working at ESPN — to then-Washington general manager Bruce Allen. It was reported earlier on Monday that the NFL sent the Raiders “damaging” emails that Gruden had sent from 2011-2018, and that comes after it was already revealed last week that Gruden used a racist trope to describe NFLPA executive director DeMaurice Smith in a 2011 email. The New York Times report featured a detailed summary about additional emails Gruden sent that featured plenty of homophobic slurs and misogynistic comments.

Gruden’s job status was already in question following the racist email, and the emergence of details about additional emails featuring homophobic and misogynistic comments certainly cemented that he’d be done coaching the Raiders.

There are so many takeaways from this story, and it’s obviously a huge deal that involves a high-profile head coach — and former Monday Night Football analyst — that signed a 10-year, $100 million contract to return to the Raiders (where he was in 1998-2001). He also won a Super Bowl as head coach of the Tampa Bay Buccaneers (where he was from 2002-08).

But here’s just a sampling of how the NFL world is reacting to the news:

The ESPN MNF booth reacts to the Jon Gruden news.

Louis Riddick: “As someone who played for him, it’s highly, highly disappointing to say the least. I’ll just leave it at that. That all this is coming out about a guy, who… I’m just shocked.” pic.twitter.com/s9gvZJvzFc

.@AdamSchefter and @ESPNBooger spoke further about Jon Gruden's departure from the Raiders. pic.twitter.com/BHiFWhyFrw

"You can tell that the weight and the gravity of the comments are really starting to hit the players more."@JosinaAnderson with how some Raiders players are reacting to the news of Jon Gruden's departure. pic.twitter.com/JC0uTb1XNf

Lot of #Raiders players & personnel are just hearing the news that Jon Gruden will no longer be HC. One said they were told Assist HC, ST Coordinator Rich Bisaccia, may be interim head coach. "It's just too much that was said. He owes lots of apologies, including to Carl Nassib."

Jon Gruden had to go, immediately. And not one person should blame “cancel culture”, this is called accountability. Period. pic.twitter.com/NIqPL2U7HV

He had to resign, there was nobody left to defend him!

You can’t be racist, homophobic and misogynistic.
You shouldn’t be any of them.

They allowed Gruden to resign…smh.

A lot of NFL owners and executives calling their IT guys tonight..

If you think about it, why would Jon Gruden have any qualms about sending slur-filled emails to Bruce Allen at his work account when the address was something like @redskins.com?

Sad thing is, yeah, Gruden is rightfully out of a job, but he's not at all the only person in the league who thinks and talks that way. That's why he felt so comfortable communicating like that.

"the co-founder of hooters, an executive who has run the outback bowl, the founder of PDQ, a Tampa-based fried chicken franchise" honestly who didn't he send racist emails to

He ends up staying for just 3+ years, finishing with a record of 22-31 with no playoff appearances and no winning seasons.