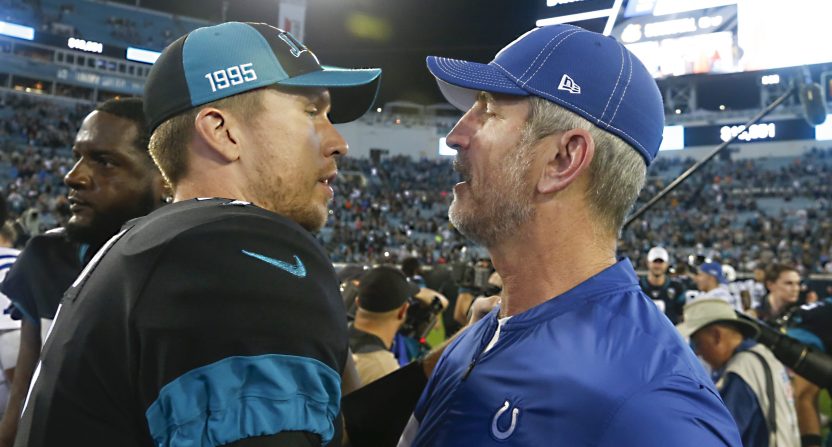 The Chicago Bears released veteran quarterback Nick Foles — as he requested — on April 30 after struggling to find a trade partner. A few weeks later, it appears that Foles is on the verge of finding a new home.

Zac Keefer of The Athletic reports that the Indianapolis Colts are “working to add” Foles, and “there’s a chance [an agreement] come by next week.”

Colts are working to add veteran QB Nick Foles, sources said. Nothing done yet, but there’s a chance it comes by next week. Makes a ton of sense on both sides. He’d backup new starter Matt Ryan.

NFL Network’s Mike Garafolo confirms the news, adding that “the expectation is [a deal will] get done early next week.”

The #Colts and QB Nick Foles are working on a deal, as @zkeefer said. The sides will continue to talk and the expectation is it’ll get done early next week. Foles and Frank Reich headed toward a reunion.

As Keefer noted, the Colts signing Foles to be Matt Ryan‘s backup would make plenty of sense.

For one, the Colts’ current backup is Sam Ehlinger, who’s attempted a grand total of zero passes in the NFL and was a sixth-round pick in the 2021 NFL Draft. Even if Indianapolis likes Ehlinger as a prospect, they may not like him enough to feel comfortable with him at quarterback in 2022 if Ryan — 37 years old — were to suffer an injury.

Additionally, the Colts’ head coach is Frank Reich, who was the offensive coordinator with the Philadelphia Eagles when Foles was the Super Bowl LII MVP for the Eagles.

Foles and Reich have a great relationship in place, and Reich likely has trust in Foles to competently run the Indianapolis offense.

At the very least, Foles would provide competition for Ehlinger, and he’d give Ehlinger two wily veteran quarterbacks to learn from.

Foles, 33, completed 24-of-35 passes for one touchdown and no interceptions for the Bears in 2021. He served as the No. 3 quarterback behind Justin Fields and Andy Dalton.

After Foles’ success in Philadelphia, he signed a four-year, $88 million deal with the Jacksonville Jaguars ahead of the 2019 season. The Jaguars went 0–4 under Foles (who had an 84.6 passer rating) before he was benched for Gardner Minshew. The Bears then traded for Foles to be their starting quarterback in 2020, and he put together an 80.8 passer rating over seven games (Chicago went 2-5).

Here’s some reaction from Twitter to the Foles-Colts news:

Nick Foles will be a great mentor for Matt Ryan. Good to have someone in the QB room who has won a Super Bowl https://t.co/KP2JF0Eed0

Signing Nick Foles would be a solid move for a solid and proven veteran QB in the league. Add in the connection with Frank Reich, felt like the move was always more if a “when” than an “if.”

Now Nick Foles is working on a deal to join Frank in Indy, according to @zkeefer pic.twitter.com/Tj0a2RMpkI

A good fit for Foles — and the Colts. https://t.co/VhYlLGi4OO

I don’t know how, but this is going to end up with Nick Foles starting and leading the Colts further than Carson Wentz did. https://t.co/NSOSyouzwG

If for some reason Matt Ryan goes down this season and Nick Foles leads the Colts on a playoff run, I will walk into the sea and let the ocean take me to a better place.