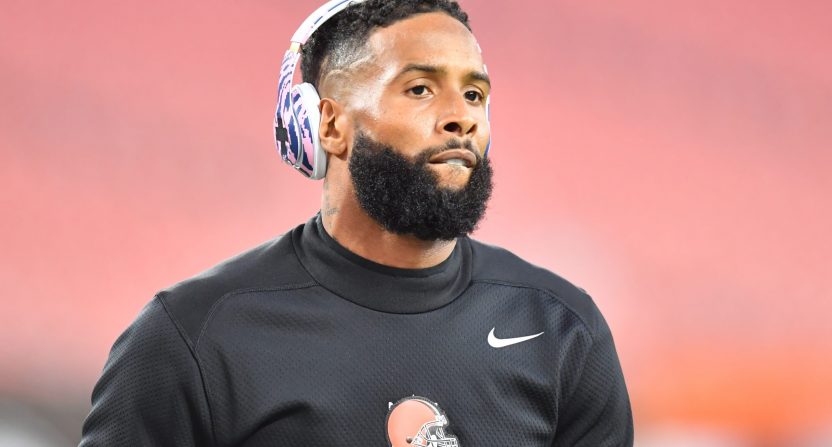 Odell Beckham Jr. has picked his new team, and it’s a bit of a surprise.

Jourdan Rodrigue of The Athletic was the first to report on Thursday afternoon that the Los Angeles Rams “are very much in play for Odell Beckham Jr.”

I will say, after a couple of conversations today, I am getting a strong sense that the Rams are very much in play for Odell Beckham Jr. Nothing certain yet obviously but they’re in this thing.

That was followed by reports that Rams and the Green Bay Packers were the finalists for Beckham.

Free agent WR Odell Beckham Jr is narrowing down his choices, and sources tell me and @KimJonesSports he’s currently focused on the #Rams and #Packers. Those appear to be his finalists.

And then ESPN’s Adam Schefter reported that Schefter was finalizing a deal with the Rams.

Well, that was followed by NFL Network’s Kim Jones reporting that Beckham told her he was still deciding between the Rams and the Packers (who had been viewed as one of the favorites entering Thursday).

Odell Beckham Jr tells me he’s on the fence between Rams & Packers.

However, Rodrigue then noted that she’d heard from two sources a deal was finalized, and that the Rams had already published an article on their official website before deleting it.

Alright so just a check-in here. Two sources said that deal with WR Odell Beckham Jr was finalized with Rams, and it had come down between the Rams and Packers.
Rams’ website also posted announcement a few minutes ago, but since removed it. pic.twitter.com/lisSGaWdxN

And Rams edge rusher Von Miller posted this on Instagram:

Von Miller and OBJ looking for a ring with the Rams. pic.twitter.com/Qau2RDNgXk

And then Jones reported that Beckham texted her, “Rams.”

The Rams have agreed to terms with WR @obj. pic.twitter.com/AX6vM4mWXw

And it is, as expected, a one-year deal between Odell Beckham Jr. and the Rams, per source.

Got all that? All of it happened in less than an hour.

Update: NFL Network’s Ian Rapoport reports that it’s a one-year deal worth up to $4.25 million for Beckham.

The #Rams gave WR Odell Beckham Jr a 1-year deal worth up to $4.25M, source said.
Details:
— $500K signing bonus
— $750K for the rest of the season
— Another $3M available in team-based incentives for how they finish the regular season and the postseason.

So, that’s how the scoopage and official report went down. But what should we make of the move itself?

Beckham, 29, was a huge disappointment in three seasons with the Cleveland Browns — particularly the past two seasons — after being a superstar with the New York Giants from 2014-18. In 2021, Beckham has 17 receptions for 232 yards and no touchdowns.

It’s been quite clear in recent weeks that the Browns and Beckham were headed for divorce, and Clevleland officially waived him earlier in the week, making him a free agent.

In Los Angeles, Beckham joins a loaded Rams team that traded for Miller less than two weeks ago. It’s Super Bowl or bust for the Rams (7-2).

This is a Rams team that already has a terrific receiving corps, led by Cooper Kupp and Robert Woods. And in an offense quarterbacked by NFL MVP candidate Matthew Stafford, and coached by highly creative offensive mind Sean McVay.

So, it remains to be seen how the target distribution will work out here, but there will be opportunities for Beckham- and he’ll make it even more of a nightmare for opposing teams to figure out how to gameplan defensively vs the Rams.

It’s a needed change of scenery for Beckham and a great chance to contend for a Super Bowl before he hits free agency again in the offseason. He has an opportunity to change the narrative and show teams that he can still be an impact receiver (maybe even a great receiver again).

Beckham told Josina Anderson that he’s “feeling the love from the Rams.”

As for how OBJ feels about his decision after receiving a lot of convincing calls and giving himself time to receive the "clarity" he was looking for, he tells me, "my heart feels good." https://t.co/pijoFpafJ5

For the Rams, well, there isn’t much to lose on a one-year deal. Maybe he takes their offense to another level and makes them the clear team to beat in the NFC (and perhaps the NFL altogether).

And if it’s not working out? He’ll just be buried on the depth chart behind stars for a few months of football. The Rams don’t *need* him, but perhaps he just makes a great team even better. It’s a classic low-risk, high-reward move.

Here are more tweets with news and reaction to OBJ signing with the Rams:

Rams source on deal “We came in a bit late —but we gave him best shot. Sold great QB. 65% pass. Single coverage.”

Looks like OBJ couldn’t pass up opportunity to play with Stafford, pass first offense & the almost certain single cov that will come from playing along Kupp & Woods

Another Rams source on OBJ “We felt we needed to add one more piece to our WR group—but they’re always on the field. This will give us the ability to rotate 4 guys for 3 spots in our base 11 pers look”

Rams swooped in outta nowhere. This move for OBJ seems as much on the field as off the field. Has a home in SoCal. Has a chance at a ring with a quality coach and QB.

The last time Jalen Ramsey posted this, the Rams traded for Von Miller.

Prior to the Odell Beckham, Jr. signing, the Rams officially had $2.3M in cap space.

Because of the money OBJ will collect from Cleveland ($4.25M), the Rams could offer Beckham a smaller salary and a chance to win in LA.

The @RamsNFL adhere to the @Lakers team building model. It’s about stars.. Put together a team of stars and let them go to work. It doesn’t always produce trophies but it’s definitely entertaining. Remember, it’s Hollywood.. ⭐️ ⭐️ ⭐️

The Rams odds to win Super Bowl 56 at @WynnBET remain the same, despite signing OBJ.

Odell Beckham Jr. is officially on the Rams@PFF_NateJahnke breaks down the fantasy football fallout ⤵️https://t.co/7zAbn6AJV6

Who is stopping this Rams offense? pic.twitter.com/UzLcNca7F5

Much like with the '21 Bucs, Steelers teams of the past, etc., I do believe there's room in the Rams offense for Cooper Kupp (strong WR1), Robert Woods (WR2/3) and OBJ (WR3) to all be quality weekly fantasy starters.