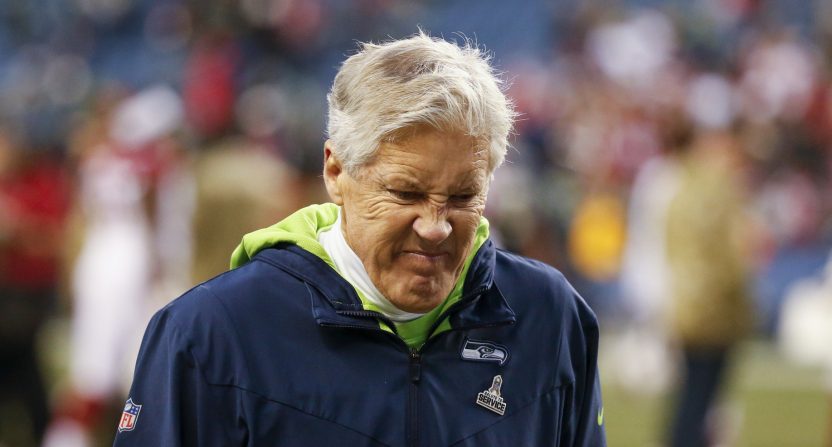 The Seattle Seahawks are in a free-fall, dropping to 3-7 following a 23-13 loss to the Arizona Cardinals on Sunday. The franchise hasn’t had a losing season since 2011, Pete Carroll’s second year as head coach. And while they would go on to win a Super Bowl, play in a second one, and become a dominant franchise in the NFL for the next decade, it appears those good times may be over.

The frustrations of the season have boiled over for Carroll, who was very different at his post-game press conference than reporters are used to. Not only was he curt and short with media members, but he left after only answering one question about how this was his most frustrating season as head coach here.

He then left the podium, only to return shortly thereafter, apologizing for doing so and answering questions.

Well that’s a first, at least in my time covering the team. Pete Carroll after about 7 minutes just said “I’m done,” stopped fielding questions and walked off the podium.

Pete Carroll didn’t make an opening statement and cut off his postgame presser as a reporter was asking a question. First time I can remember him doing either. pic.twitter.com/eKOXgEPxFn

Clearly, it feels like the end of Pete Carroll’s time with the Seahawks could be approaching. It certainly seems to bring up conflicting feels for many Seattle fans and NFL fans. On one hand, the franchise is seven years removed from its last Super Bowl appearance and seems to be trending in a bad direction, with quarterback Russell Wilson having one foot out the door already. On the other hand, Carroll is the most successful coach in franchise history and has overseen the best stretch they’ve ever had.

It all leads to some interesting thoughts from NFL fans on social media about Carroll following his press conference.

You don’t have to be a torch bearer running down the street or a fake tough Twitter person to simply acknowledge and appreciate Pete Carroll’s incredible tenure here yet feel his time has come and gone and it’s time to move on. Sorry for the lack of drama, but let’s face it.

For those who want Pete Carroll gone, I honestly think this is the game you should be hoping for. This is exactly the evidence you want.

Printing out a “I bought Pete Carroll and Russell Wilson and all I got out of it was a championship and a decade of excellence” t-shirt.

Start the Pete Carroll back to USC rumors https://t.co/wavA2ss7oF

You can say what you want about Pete Carroll as a coach right now & about him walking out of the room frustrated the first time.

Coming back, & validating the job reporters have to do, to answer more questions, says a lot about Carroll’s character as a person https://t.co/TF6iW845tV

The Seahawks travel to the East Coast to play the Washington Football Team this weekend. If they win there it could spark a turnaround. But the odds look good that this will end up being a losing season for the team, and with that are likely to be big changes.