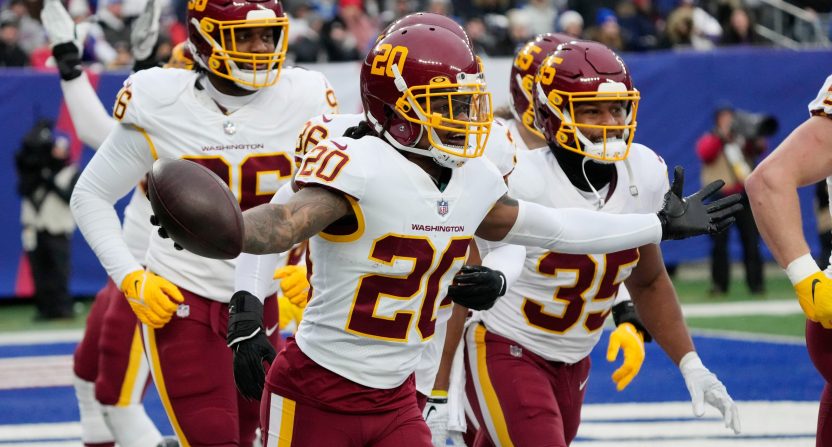 Due to publicly available domain information, many have pointed to the “Commanders” being the new name of the Washington Football Team. While it’s not 100% confirmed, it’s the likely candidate when the new name is revealed on February 2.

Reaction about the Washington Commanders has ranged from neutral to negative. Typically, a team rebrand will tend to have a negative reaction because it’s new and it’ll take a while for people to get used to that. This one is hitting a bit different.

For one thing, some have taken to shortening the Commanders’ name and calling them the “Commies” which is pretty much the exact opposite of what they’re trying to achieve with Commanders. And second, anyone who has read or seen The Handmaid’s Tale knows that calling a team the “Commanders” isn’t the best idea.

In The Handmaid’s Tale, the “commanders” are a group of men who rule over the oppressed “handmaids,” which are fertile women who are made to have children and at times are subjected to rape. Given that the Washington Football Team has been the subject of investigations and fines about the treatment of their cheerleaders, being called the “Commanders” may not go how the team thinks it will.

Many gave their thoughts on the potential new name. There’s still six days for WFT to change their minds but time is ticking.

If the name does end up being Washington Commanders, it would only be fitting that they botched the secret by giving NBC Washington unblurred footage. pic.twitter.com/Ho3TeRliGr

I have a feeling if it's Commanders the shortened reference will be Commies, which isn't good for a Washington team.

Let me mentally prepare to call myself a Commanders fan pic.twitter.com/H80SNmyrr9

Commanders would be a HUGE mistake! For a team trying to rebuild their image after a serious sexual harassment issues, the Commanders in the popular show, Handmaid's Tale, forced women into sexual slavery, raped them, and forced them to have their babies!

I've said "Commanders" enough over the last few weeks that I've moved past the "grieving" stage to "acceptance". Let's go.

One week until I can change my name from “Washington Football Fan” to “Washington Commanders Fan” #WashingtonFootball pic.twitter.com/npp6rkW4PJ