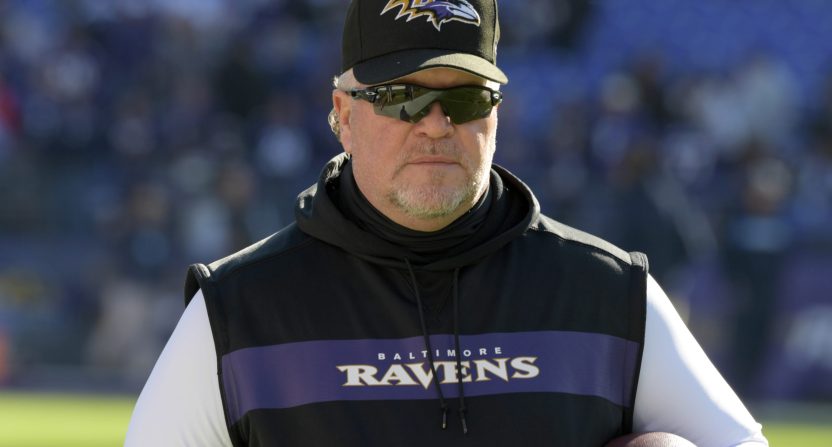 The Baltimore Ravens made a very surprising coaching move on Friday evening with the decision to fire defensive coordinator Don “Wink” Martindale.

Baltimore announced the news with a statement from head coach John Harbaugh, who said that he and Martindale “have agreed to move forward in separate directions.”

A shocker: The #Ravens and DC Don “Wink” Martindale are parting ways. https://t.co/5pvjNC2T8J

“After several productive conversations, Don and I have agreed to move forward in separate directions. We have had a great run on defense, and I am very proud of what has been accomplished and the work he has done. Don has been a major contributor to the success of our defense since 2012, and especially since he became defensive coordinator four years ago. He has done a great job. Now it is time to pursue other opportunities. Sometimes the moment comes, and it’s the right time. I am personally grateful for our friendship and for everything he has done in Baltimore.”

The Ravens’ defense wasn’t its usual self in the 2021 NFL season, ranking as a bottom-10 unit in many statistical categories. Baltimore ranked as the No. 25 defense this year (and 28th in DVOA), after finishing in the top-10 in Martindale’s other three seasons. But the Ravens also dealt with several key injuries that factored into the 2021 struggles.

ESPN’s Adam Schefter tweeted that Martindale “is expected to be one of the hottest assistant hires out there.”

Ravens fired DC Wink Martindale with one year left on his contract; he now is expected to be one of the hottest assistant hires out there.

Martindale, 58, had been with Baltimore since 2012; he was a linebackers coach on their Super Bowl XLVII staff. In 2018, he was promoted to defensive coordinator, a role he also held with the Denver Broncos in 2010. He’s known for having very aggressive defenses.

The news — and timing; most such firings were made immediately after the NFL regular season ended — stunned the football world, and immediately led to speculation of where Martindale could end up next, as well as what the Ravens will do to replace him.

Ravens have always filled their defensive coordinator opening from within. On staff, they have DL coach Anthony Weaver, who has some DC experience. Defensive pass game coordinator Chris Hewitt was also viewed at one point as being possible heir apparent to Martindale.

Martindale had one year left on his contract. He's coveted a head coaching opportunity the past 2 yrs, but if that doesn't come, he'll probably have no problem getting a DC job elsewhere if he wants one.

Wink Martindale is out as Ravens DC. How about that for a Friday night press release?

Definitely didn’t have Wink Martindale being the only coaching move the #Ravens made this offseason.

A couple of other connections:

Don Martindale worked with Jim Caldwell for two years and Leslie Frazier for one year in Baltimore. Caldwell and Frazier are both interviewing for HC jobs.

Perhaps Brian Flores as well if no one makes him a HC?

Good year to need help with coaching on defense

Zimmer, Fangio, Flores, and Martindale all got fired this offseason man offenses are going to be putting up 35+ a game next year

The Giants should hire the person they think will be the best possible head coach. But the market of proven DCs (Vic Fangio, Wink Martindale, Mike Zimmer, Patrick Graham) is a hell of a lot more impressive than the OC options. Something to at least consider.

The Don Martindale drip will forever live on pic.twitter.com/CnrLkCbT3i

Martindale and Flores on every play when they join forces in Chicago pic.twitter.com/Q6H69a1tUi