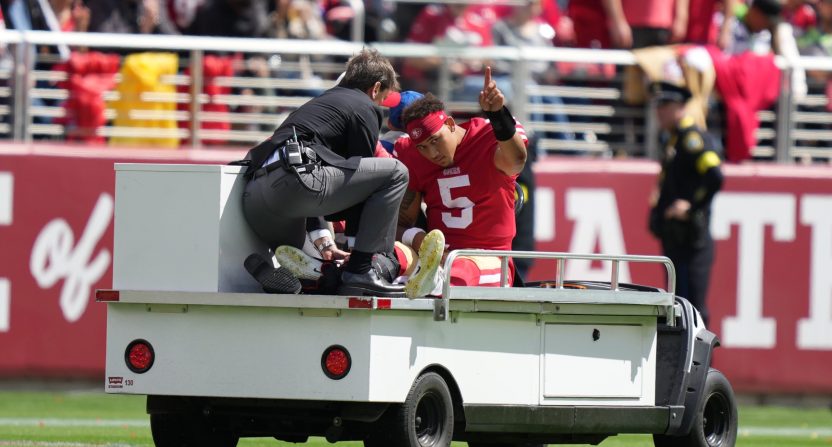 It’s never something a team wants to experience but San Francisco 49ers starting quarterback Trey Lance suffered an ankle injury early in their game against the Seattle Seahawks.

Lance has already been ruled out of the game as he had to have an air cast placed on his leg and be carted off the field. It was a very disheartening sight as the third year quarterback was finally getting a shot at being the starter.

In his place is a familiar face, former starter Jimmy Garoppolo. After not finding a trade partner over the summer, the 49ers decided to keep Garoppolo while the two sides restructured his contract. The move to keep Jimmy G as a backup might unfortunately be a stroke of genius if Lance is going to be out for an extended period of time.

If that’s the case, this is Garoppolo’s audition to show the NFL what he can do as he is likely to sign elsewhere next season. Garoppolo’s first drive was a perfect 4-for-4 with 70 passing yards and a touchdown.

Anyway, the focus is on Lance as reactions ranged from sending prayers for his health, criticizing head coach Kyle Shanahan for putting him in a spot to get injured, and praising the Niners front office for keeping Garoppolo.

Trey Lance is being carted off the field.

Feel so badly for Trey Lance, who is surely facing a long road back. Sucks. https://t.co/lsNfvWjvIX

I feel so sorry for Trey Lance. This did not have to happen. Kyle misued the poor guy.

Prayers up for Trey Lance. He was carted off the field with his leg in an air cast. Brutal. #49ers pic.twitter.com/vHbTAghFhr

Trey Lance is not a running QB, he's a QB who can run. There's a big difference. On 2nd & 8, there's no need for QB draw up the middle between tackles. You’ll never convince me that’s a good idea.

Needless to say, exactly why running Trey Lance in between the tackles so much was cause for concern, and the 49ers are certainly thankful that they still have Jimmy Garoppolo now

It's not that Trey Lance should've been exclusively a pocket passer. It's more that we've been told repeatedly that Kyle Shanahan is one of the best play callers/designers and Lance's run plays were repetitive and lacked imagination. Made it easy for opposing teams to scout.

Kyle Shanahan sat Trey Lance for a year just so he could develop him into a fullback and break him after four starts.

On the flip side, I truly believe Jimmy Garoppolo is going to secure another $100 million dollar contract.

UPDATE: Adam Schefter of ESPN reported that Lance is expected to require surgery and his season is likely over.

49ers’ QB Trey Lance suffered a significant ankle injury today that is expected to require surgery that likely will end his season, per source.