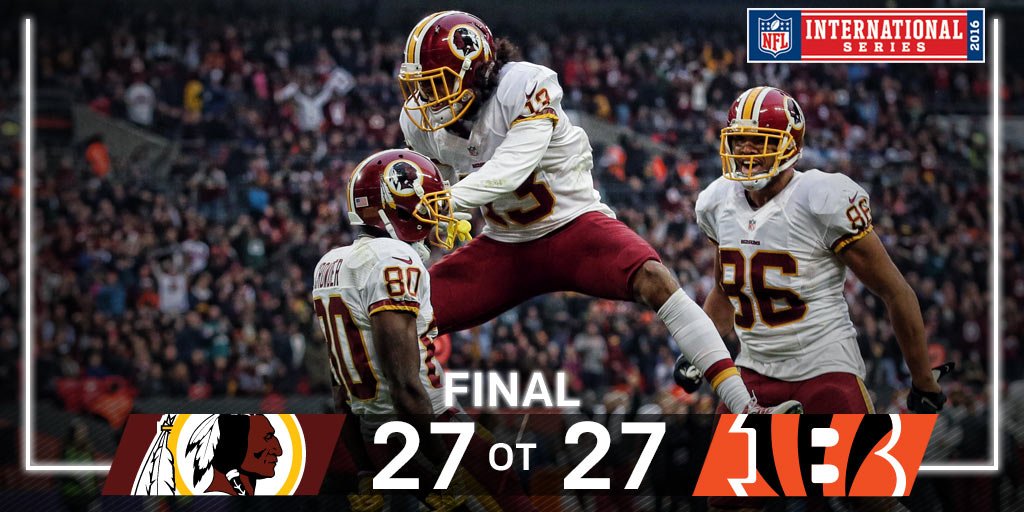 New markets, new audiences, whole new populations of people to use as a revenue stream. The NBA does it, MLB does it, European soccer leagues and teams do it.

There’s a problem with the NFL’s strategy, though, in that most of the games they send over to London are, well, bad. There are some obvious factors there. Adding overseas travel to the week never helps, first and foremost. It’s a major break in routine for everyone involved, from players to coaches to officials, culminating in a game at an unfamiliar stadium in front of a patchwork crowd.

This season, the league has had trouble maintaining quality of play in regular games as it is, which is likely a factor in the league’s declining ratings. The weekly Thursday Night Football games have become slogs, either blowouts or bad games. This past Sunday night, SNF saw a 6-6 tie, the result of two missed chip shot field goals at the end of overtime.

It was a perfect storm in London this morning, as Washington took on Cincinnati.

Let’s go to the highlights! (Well, a few, from near the end of the game.)

This Andy Dalton pass did not go as planned…

The @Redskins take the lead!

Sure, those aren’t all bad!

Washington even made a field goal to force overtime!

Perhaps things were finally looking up for an NFL game in London, in a national broadcast window (albeit one early Sunday morning.)

And then, we got to overtime. And things stalled immediately, with consecutive punts.

Washington managed to drive down the field, where they set up for a game-winning chip shot.

The Bengals drove back to midfield, where they attempted to convert a first down with a quick sneak:

And then Washington failed on a Hail Mary, and that was that. Another tie game.

Which the NFL celebrated hilariously:

This one wasn’t 6-6, and some have made the point that a tie game does not automatically mean it was a bad one. (Some people made that point after the 6-6 game.)

But the main defense of a tie is that sometimes, neither team deserves to lose. That’s certainly true in sports like soccer and hockey, where even goalless ties can be wildly entertaining, edge-of-your-seat affairs. Those sports are not really comparable, though, thanks to their constant flow. They’re real-time strategy games, as opposed to the NFL’s turn-based style of possession. (Age of Empires vs. Civilization, if that helps anyone.)

It’s actually hard to tie an NFL game! Maybe a bit easier now that the overtime rules guarantee each team a possession if a field goal is the opening score. But in general, it’s really hard to tie. It requires a fairly incompetent strategy, or a multitude of mistakes on the field, to mismanage the clock and possessions to the point where you’re unable to win a game. No one should feel good about a tie that came about because a team missed a chip shot field goal.

The league’s global strategy isn’t going to be enhanced by exporting games that American fans wouldn’t even be that excited to see. And yet the NFL is fairly committed at this point, with the London franchise pipe dream still alive. They’re going to continue to export games overseas, regardless of quality.

Speaking of, who’s pumped for Texans/Raiders in Mexico City on November 21st?