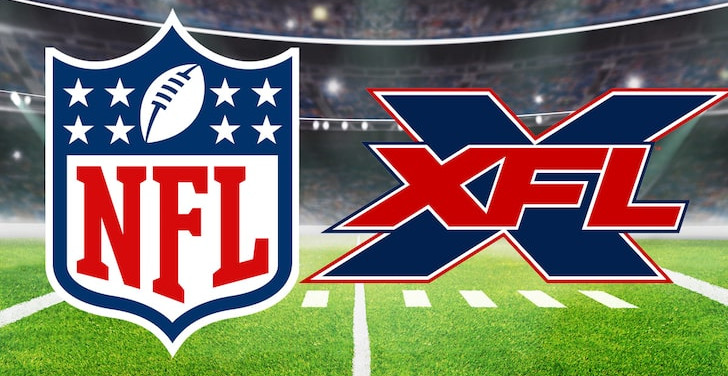 Perhaps the closest the NFL has come over the years is with a $3 million loan to the Canadian Football League in 1997 (which played a key role in the CFL’s survival). And that was back in an era where the league was also supporting NFL Europe (which it had a lot more control over than any of these other entities). Since then, we haven’t seen even a lot of acknowledgment of other leagues from the NFL. So that makes the “collaboration” they announced with the XFL Monday interesting, even if it’s far from clear that it will mean anything. Here are the key parts of that statement:

The National Football League and XFL will collaborate on select innovation programs to “further expand the game of football and create increased opportunities for player development both on and off the field,” the XFL announced Monday.

The XFL says the focus of its collaboration with the NFL will be health and safety initiatives, including “forward thinking physical and mental fitness programs for players, the study of playing surfaces and equipment and the sharing of game trends and data.”

“The XFL has shown us that innovation is one of its core principles,” NFL executive VP of football operations Troy Vincent said in a statement. “We are hopeful that this relationship will support further development and improvements in the game of football at all levels.”

It’s notable that there’s very little tangible in that statement. And, in a lot of ways, it’s not that far from the statement put out when the CFL and XFL “jointly decided to not pursue any formal arrangements at this time” last summer. CFL commissioner Randy Ambrosie at that point highlighted “positive and constructive talks” that were “exploring the potential for collaboration and innovation,” and said, “We remain open to finding new ways to work together in the future.”

Granted, that wasn’t the headline, because a lot of the talk leading up to that statement had even been about something as binding as a merger (although some of those claims deserved skepticism), but the loose concepts explored in CFL-XFL talks are now being referenced in XFL-NFL talks. And it’s notable that ESPN’s Kevin Seifert (who has done a solid job of covering various non-NFL leagues for the Worldwide Leader for a decade-plus now, in addition to his NFL duties)’s piece on this outlined specifically what this deal won’t include, namely “player sharing for developmental purposes.” Some highlights from that:

XFL officials made clear that the collaboration will not include player sharing for developmental purposes, but the alignment is notable given the growing number of alternative leagues in the football landscape.

The deal is nonexclusive and does not prevent either league from working with others moving forward.

The NFL-XFL agreement will give the NFL a “petri dish” to experiment with proposed rules, test new equipment and develop prospective officials and coaches, XFL president Russ Brandon told ESPN.

…”People would ask, ‘What are the opportunities to look at the game through a different lens from a player development standpoint?'” Brandon told ESPN. “‘How can you be an incubator or an accelerant in many different verticals, from officiating to rules innovations to playing surfaces, to player development?’ You can go on and on.”

“Any opportunity that the NFL has to advance the game of football, I think they’ve always been open to, and we’ve had some really good dialogue, led by our ownership group.”

There’s absolutely some potential there for the NFL. But an interesting part of this is that many of those angles have already taken place with other leagues without any announcement of this sort of nature. The CFL, for example, has worked with the NFL on a joint officiating program, and some of that league’s recent rule changes (including reviewable pass interference and lengthened converts) wound up in the NFL in some form, at least for a time. The NFL also kept close tabs on the AAF and XFL (2.0) from a rules and broadcasting standpoint as well as acquiring players.

And the NFL certainly would not have to say “Hey, we’re collaborating with the XFL” just to passively watch XFL changes and adopt them if they like them. That kind of mention, in a statement that winds up on NFL.com, is very useful for the XFL, especially as it tries to build its own legitimacy more than a year ahead of its actual on-the-field relaunch (and with a new competitor, the new USFL, launching first this year). It’s not as obvious of a win for the NFL. However, there may be some merit to this particular limited partnership announcement from the NFL’s side as well.

One potential key here is intention. Observing potential rule and broadcast changes is one thing, and that has its merits, but a partnership like this seems to let the NFL at least suggest some to the XFL, and (if the XFL accepts) see how those go. We’ve seen that in baseball in particular recently, with various rule changes tried out in both MLB-affiliated minor leagues and various non-affiliated leagues before being brought to MLB proper. So if the NFL is looking to actually test specific ideas, this is a more efficient way to do that rather than waiting for another league to think of them on their own. There’s also a discussion of potential fall combines in Seifert’s piece (albeit with minimal details), and if a partnership here allows the NFL to have a role in those (and possibly-to-likely snap up the absolute top prospects for itself), that could be valuable for the bigger league.

Another possible reason for the NFL to make this deal with this league, but not a similar deal previously, is that this XFL, in particular, does not appear to be trying to position itself as an NFL competitor (in sharp contrast to the 2001 XFL, and in somewhat contrast to some other leagues). The comments from XFL leadership so far seem to be of a league that’s focused on doing its spring football thing rather than even trying to take on the NFL behemoth. It’s also notable that this collaboration and discussion idea is not new for this XFL (see the above-linked piece on CFL-XFL talks), so it’s not like they only came up with this to get the NFL on board. (And Ben Fischer of Sports Business Journal noted that NFL-XFL talks began in some fashion last fall, so this does not appear to have been a quick process from approach to a statement.)

The new XFL’s leadership is perhaps a bit reassuring for the NFL, too. A huge problem for many of these other leagues has been finances. But Dany Garcia, Dwayne “The Rock” Johnson, and RedBird Capital clearly have money, and they have NFL connections, with Johnson even giving an on-field pre-game Super Bowl speech this year and with RedBird founder and managing partner Gerry Cardinale‘s sports connections including working with the Cowboys (and the Yankees) to create massive stadium concession firm Legends Hospitality. Yes, absolutely, there are big questions about if this new XFL will last, and about how long these owners will fund it if it’s not working, but it seems unlikely it will run out of money partway through its first season as the AAF did. (On that front, many of these leagues boast former NFL personnel executives, but it’s notable that the XFL has a former NFL business-side executive in a key role in Brandon.)

Of course, at this point, this agreement is only just words, and more of them are coming from the XFL side than the NFL side. The NFL doesn’t appear firmly committed to anything specific. And this may never lead to much. But it’s at the very least interesting to see the NFL offering more recognition of another league than what we usually see from them. And there is maybe a chance that this could lead to something tangible.

The NFL does need some prospect development of some post-NCAA players who don’t immediately make the NFL, and it does need to keep an eye out for potential rules or broadcast innovations. To this point, it’s largely done so as a passive observer of other leagues, and that’s been fine for it. But a very limited partnership with one or more of those leagues might pay its own dividends. We’ll see how that idea works out with the XFL.