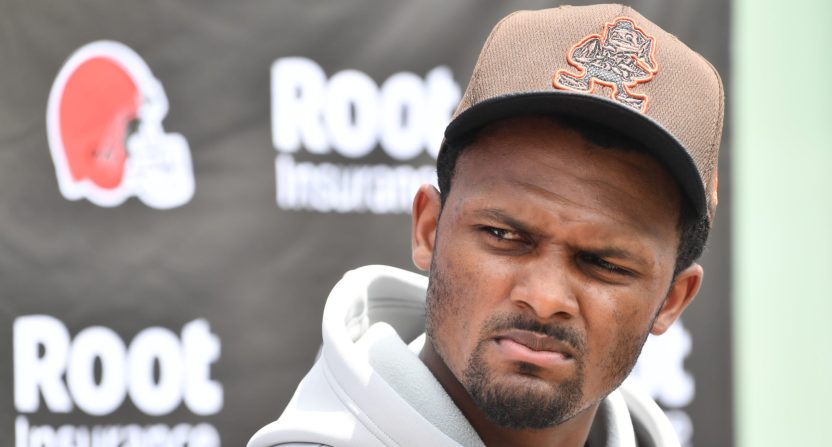 We are still waiting for the NFL to announce their punishment decision regarding Cleveland Browns quarterback Deshaun Watson based on the ruling handed down by Judge Sue Robinson, which is expected in the coming weeks.

It has been reported that the NFL is seeking a year-long suspension, whether that comes from Robinson or a potential league appeal of her decision. If that were to be the case, the NFLPA and Watson reportedly plan to file a lawsuit against the NFL in federal court.

Another note: If Watson ends up incurring the full-year suspension the #NFL is seeking – either from the arbitrator or a league appeal of Robinson’s decision – I’m told his camp and the @NFLPA have already made the decision to file a lawsuit against the league in federal court. https://t.co/KdwXJjhBz3

Many around the NFL world are certainly surprised that both he and the NFLPA are planning to go to these lengths to reduce a suspension for such an open and shut case as Watson’s appears to be.

One way or another, this Deshaun Watson case is going to be an absolute mess#Browns https://t.co/XfOrdxotbb

This is significant. #Browns

Deshaun Watson's camp and the NFLPA just publicly threatened to take the NFL to federal court if they issue a full season suspension. https://t.co/v9vWbSfnZ2

History would tell us that this type of lawsuit from Watson would likely not end well. Tom Brady appealed his four-game suspension in federal court for “Deflategate” in 2016 and it was not overturned.

Given the severity of Watson’s lawsuit, the chances he would get his suspension wiped away are almost zero, and even a reduction of a suspension seems to be very unlikely.

What this may do is impact the NFL’s decision to appeal Robinson’s ruling if it comes back as a suspension of less than a year.

A court lawsuit from the NFLPA would be a worst-case scenario for the league as it would only amplify the controversy that Watson has brought to the league for his sexual misconduct civil lawsuits against him. The league is surely hoping to end this issue sooner than later.

Whether or not it is a year-long suspension for Watson remains to be seen, but it certainly looks like the quarterback will fight to the bitter end, for better or for worse.