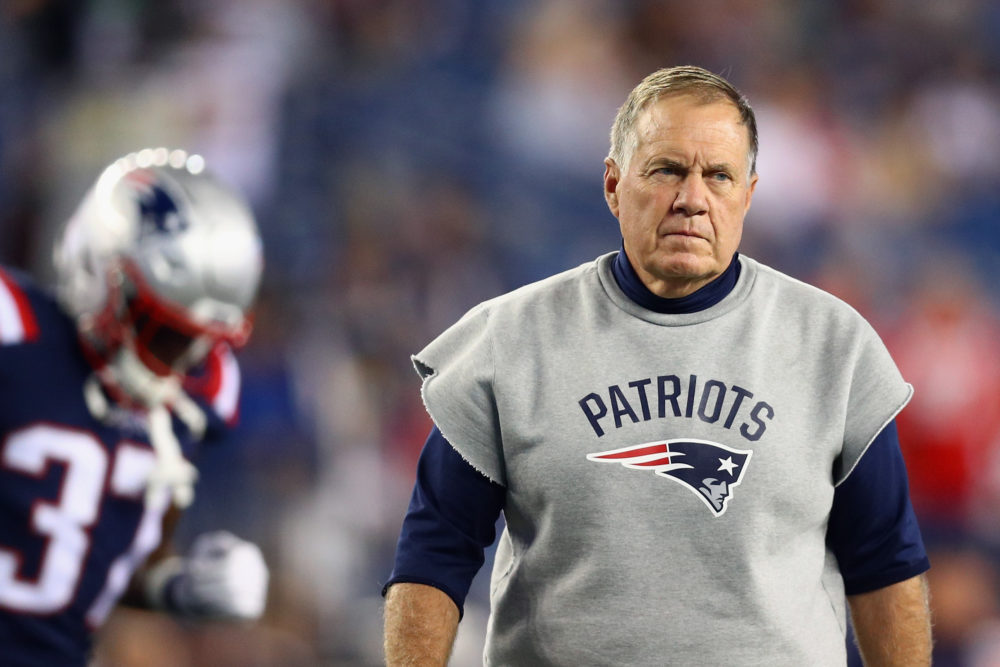 Take a game out of the United States, and Bill Belichick will be a little more disgruntled than usual because now he has to make changes to his approach for the sake of expanding the NFL brand.

On Sunday, the Patriots may have worked on a different schedule leading up to their game in Mexico City against the Oakland Raiders, but the Patriots still managed to thump the Raiders. Winning is nice, but that doesn’t mean Belichick is looking forward to the next time he has to go through this.

Except for the Jaguars and Dolphins, who volunteer to play home games abroad, no team in the NFL has played more regular season games outside the United States than the Patriots. Part of that comes with the territory of being one of the most successful franchises. The NFL needs a team that can show off the best the league has to offer, and the Patriots have been the most consistently successful franchise in the league since the NFL began expanding their international schedule.

“Personally, I wouldn’t be in any big rush to do it again,” Belichick said Monday during a radio interview with WEEI. Belichick then laid out his concerns with playing a game like this. To put it simply, this isn’t your ordinary road trip.

“It’s a long way to go for a game. There’s a lot in terms of all the logistics of it,” Belichick said. “They are not used to having an NFL team, so you have to go in there and handle a lot of the logistics. It took a lot of manpower, a lot of hours, a lot of energy out of our organization to do that. We are exhausted from the trip.”

Considering how much Belichick likes to stick to his normal routine during the season, having to make adjustments to play a game in Mexico is quite a bother.

“It’s a lot. We spent a lot of time talking about altitude, about hydration, about food, water, training elements — much more so than, say, Denver. Pick another city that has some similarities, but it is quite a bit different,” Belichick explained.

“We dealt with it. Players did a great job dealing with all the challenges we had to deal with. I think we’re fortunate there was no volcano eruptions or earthquakes, or anything else while we were down there,” Belichick said, showing a mild sense of humor that comes out once in a blue moon. “You have two NFL franchises in an area that I don’t know how stable the geological plates that were below us [were], but nothing happened, so that was good.”

The NFL has a long history of playing games outside of the United States that goes back to the 1950s and 1960s, but most of those games over the decades had been exhibitions or preseason games.

In 2005, the NFL staged its first regular-season contest in Mexico City when the Arizona Cardinals and San Francisco 49ers played a game on Oct. 2 in Estadio Azteca, the go-to site any time the NFL travels south of the border. The 2005 trip to Mexico City was the beginning of the NFL’s globalization of the brand abroad.

From 2005 on, the NFL has played annual regular-season games in London as well as in Toronto. The NFL did not return to Mexico City until last season when the Raiders played the Houston Texans last November. At the time, the NFL had hinted it would like to continue playing more games in Mexico City, and the league is committing to playing an annual game in Mexico City through the 2021 season.

At the same time, the NFL continues to insist on making the NFL in London a thing with an expanded regular season schedule in London and the thought of a full-time franchise playing in London still on the table awaiting an owner willing to take the gamble. It makes perfect sense why the NFL continues to try to expand its reach, even if it comes at the expense of the players and coaches.

Belichick has long been a critic of how much the NFL is investing in these international games as well. In 2015, Belichick reportedly stood up at a meeting of NFL owners and ripped how much the league invests in a number of projects like international games while not opting to fund something as simple and obvious like goal-line cameras, a battle he has long been battling (which I support 100 percent).

The best head coach in the NFL has a solid point. The NFL continues to spend money on making games outside the country work well, while it comes up short of improving the game within the United States despite some obvious improvements that could be made. The NFL is going to do what it wants, and what it wants is to sell the game to new markets. At a time when the league continues to be criticized by new political agendas, the league needs to expand as well as keep its audience in the United States.

That means Belichick may have to deal with the hassle of modifying his game preparation once more if the NFL makes the Patriots take their passports for a road game again.