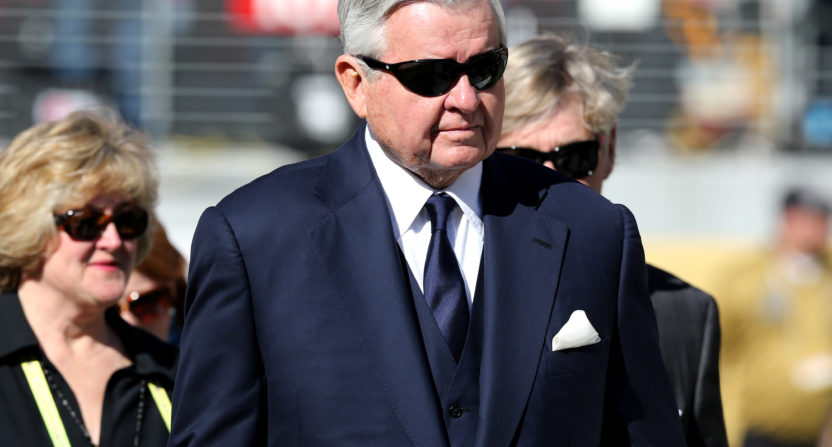 The NFL released a report detailing the findings of an independent investigation into the workplace conduct of outgoing Carolina Panthers owner Jerry Richardson. Richardson had already agreed to sell the franchise in the wake of allegations that surfaced last December.

The release isn’t the complete report, sadly, but it does say the claims were substantiated, and considering it also details a $2.75 million fine levied to Richardson, there’s no reason to suspect otherwise. You can read the report here, though here are some key parts:

First, the review identified each of the allegations that has been publicly reported as well as similar matters that have not been the subject of public discussion.

Second, while the investigation was not limited to the matters that have been publicly reported, and did not seek to confirm or reject the details of each specific allegation made regarding Mr. Richardson, it did substantiate the claims that have been made, and identified no information that would either discredit the claims made or that would undermine the veracity of the employees who have made those claims.

Third, the improper conduct was limited to Mr. Richardson. No other employee of the Panthers is alleged to have engaged in such conduct, and the review did not discover evidence of similar conduct by other employees of the club.

Fourth, the investigation also confirmed that the Panthers and its ownership did not report the claims, or any agreements to resolve those claims, to the League Office and that neither the League Office nor the club’s limited partners were aware of these matters until they became public in December of 2017.

So, on one hand, it’s nice that the league substantiated the claims and released at least that much to confirm and validate those who first came forward. A cynical reading of points three and four would point to the team and league using the occasion to protect themselves, respectively, and when it comes to NFL investigations, cynicism isn’t exactly unearned.

The rest of the report details the fine and the charities to which that money will go, which again, a cynical reading could look at as an attempt to marry PR for the league into a report that was much less forthcoming with details of the actual misconduct it uncovered from a very prominent league owner and former player. It closes with four league-wide steps investigator (former U.S. Attorney and SEC commissioner) Mary Jo White recommended, and they all make sense:

Those seem like common sense changes that could help prevent something similar from happening in the future, at least to the extent it was allowed to happen within the Panthers organization.

In the end, though, the big story is that those claims were all true; once again, anyone whose initial reaction was to not believe the victims comes out looking very bad, some worse than others. The league will be better off without Jerry Richardson involved, which can’t come soon enough.