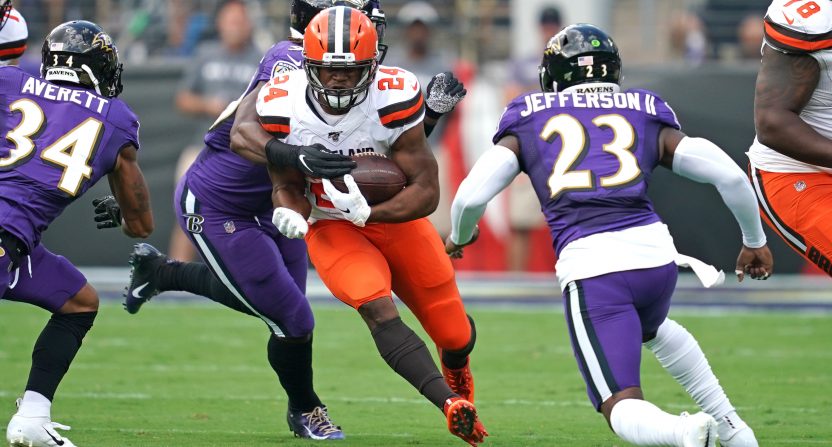 So far this season the Cleveland Browns haven’t quite lived up to the preseason hype. Taking a 1-2 record into Sunday’s game against divisional rival Baltimore Ravens, this one felt like the game where we’d find out for sure whether or not they were still a potential playoff team or if Cleveland was going to spend another season in disappointment.

If the results of their 40-25 victory over Baltimore are any indication, the Browns will be disappointing their fans another day.

The Ravens, who looked like a Super Bowl contender two weeks into the season, has now spiraled down into a 2-2 record. Their impressive defense gave up over 500 yards for the second-straight game. Meanwhile, Lamar Jackson, who has wowed fans so far, did account for three touchdowns on the day but mostly played a pedestrian game, eventually throwing back-to-back interceptions in the fourth quarter to nullify any chance Baltimore had of getting back into the game.

The story of the day, however, was Browns running back Nick Chubb. The second-year player became the first Browns RB to ever have two rushing touchdowns against the Ravens. He did so while running for 165 yards on 20 carries, scoring a career-high three total touchdowns along the way.

Chubb didn’t actually get on the board until the third quarter but his tackle-breaking 14-yard touchdown run put the Browns up 17-10 and they didn’t look back from there.

Later on the third, Cleveland capitalized on a Ravens fumble and worked their way quickly down to the two-yard line. Chubb was there to punch this in for a score as well and the Browns now led 24-10.

The Ravens would score and cut the lead to 24-18, but the Browns sealed the deal on the next drive. After a false start pushed them back, Chubb then lit up the Ravens and the scoreboard with his best run of the day (and season), an 88-yard scamper to make it 30-18 (the Browns missed the two-point conversion, not that it mattered).

For the record, Chubb was moving on that run. And if you can imagine what it must be like to get hit by Chubb while he’s running over 20 MPH, then you might understand why he’s so hard to stop.

Nick Chubb reached 21.95 MPH on this 88-yard TD run, the fastest speed reached on a touchdown this season.@NickChubb21 sustained 21+ MPH for 44.4 yards, from the Browns 33 yard line to the Ravens 21 yard line.#CLEvsBAL | #Browns pic.twitter.com/AARpBPGS3H

From there the Browns capitalized on two interceptions and ran away with the score and the game.

Not only does the win help cut down on the Ravens’ dominance over the Browns (it’s only the second time they’ve beaten them in Baltimore under John Harbaugh in 12 tries), but it also moves the Browns into first place in the AFC North (via the tiebreaker). Now that they’re where a lot of people expected them to be, we’ll find out if Cleveland can keep it up. That, however, might be up to Nick Chubb.