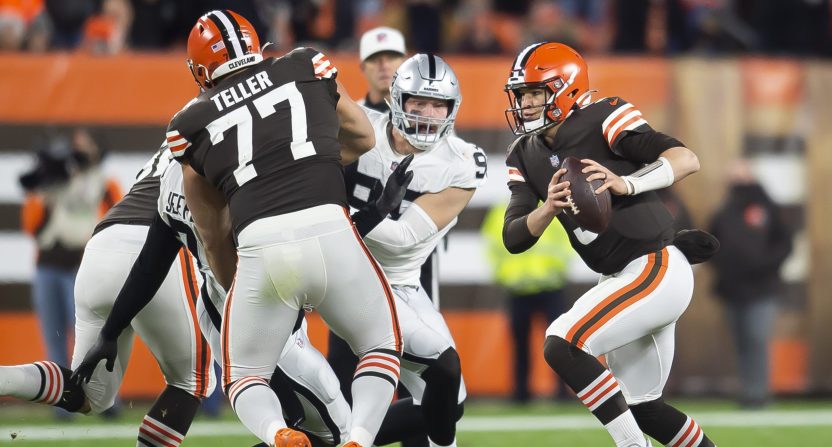 The Cleveland Browns found themselves without starting quarterback Baker Mayfield and backup quarterback Case Keenum on Monday night when they (finally) played the Las Vegas Raiders.

Assuming they wouldn’t be able to play, the Browns signed Nick Mullens from their practice squad earlier in the week. While they also signed some other quarterbacks as backup plans, it was going to be on Mullens’s shoulders to carry the offense, or what was left of it after positive COVID-19 tests decimated the roster.

Mullens, a 26-year-old quarterback out of Southern Miss, is in his fifth season in the NFL. He spent the first four seasons with the San Francisco 49ers and started 16 games with them between 2018 and 2020. Over his career, he’s thrown for 4,714 passing yards, 25 touchdowns, and 22 interceptions coming into Monday.

Mullens actually ended up holding his own pretty well, all things considered. He finished the night going 20-of-30 for 147 yards and a touchdown. Not exactly world-beating stats but he did his part, at least.

Nick Mullens to Harrison Bryant! The Browns make the extra point to take a 14-13 lead over the Raiders with 3:45 remaining. 🏈 pic.twitter.com/wJQrY9DXta

And he almost pulled off the big win, but the Raiders got a 48-yard field goal from Daniel Carlson as time expired to come away with a 16-14 victory.

Still, Mullens impressed enough people that NFL folks on social media had some praise for him. At least, as much praise as they could muster for a third-string quarterback on the Browns.

Nick Mullens has to be the greatest third-string QB in NFL history. He’s done it in San Francisco and now Cleveland.

I don't care if they don't win, you can't not feel good for Nick Mullens and Cleveland.

Half the team dead with COVID and they're still somehow in it. Impressive.

Add Nick Mullens to the Tyler Huntley list of “Backup QBs whose coaches trust them to pick a 4th & medium more than Belichick trusts Mac Jones”.

Alas, it’s probably the last time we’ll see Mullens start this season, barring some kind of wild turn of events (though to be fair a wild turn of events is how he ended up here). But perhaps Nick has done enough to earn some a shot here or elsewhere next season so that the Nick Mullens train can keep chugging along.