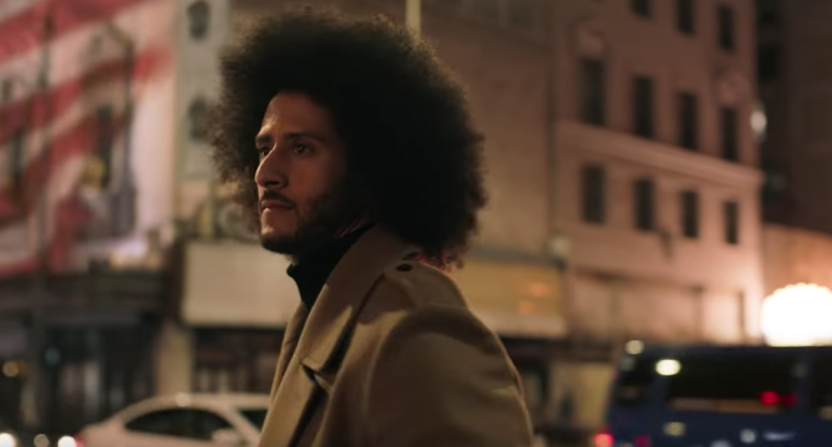 If you thought all the shoe burning and sock cutting was going to deter Nike from leaning into their new ad campaign centered around Colin Kaepernick, that certainly isn’t the case.

While all of this was meticulously planned for (including the competing waves of backlash and support), Nike has created a second wave of publicity today by releasing their new ad campaign onto social media this afternoon. The ad features many athletes but is narrated by Kaepernick himself. That will certainly go over well with some, but caused further outrage from those who don’t agree with Kaepernick’s decision to kneel for the national anthem over concerns of racial injustice. In addition to the news of Kaepernick, Darren Rovell revealed that the splashy new ad will drop tomorrow night during the Falcons vs. Eagles game on NBC.

The ad itself features over a dozen athletes and centers around the tagline “Don’t ask if your dreams are crazy. Ask if they’re crazy enough”.

So let’s talk about this.

First off, the news of Kaepernick being featured in this campaign broke on a holiday Monday. It’s dominated the news cycle since and will continue to do so through at least Friday. When have we ever talked about a commercial this much? Or even half this much? While a lot of the attention at Nike’s new direction has been negative, the real question is will this translate into a dip in sales for the brand? More specifically, will boycotting consumers materialize at a scale large enough to outweigh any uptick of sales this campaign and Kaepernick’s product line will register?

While the answer to that question is probably driven by your political leanings, I and many others are of the thought Nike didn’t just say “fuck it, just do it” (get it!), but instead ran the numbers countless times and were confident that while the brand would see some customers walk away, it would be more than made up for by new customers or existing customers buying more. (That other companies were reportedly interested in Kaepernick backs that up a bit, too.)

The ad itself is pretty standard high brow splashy Nike. It’s meant to inspire. It’s on brand. Word hard, keep going, you can do it, and these stars did it. It checks about every box you could in terms of the sports, ethnicities, and backgrounds you could hit. I don’t think anyone would take much issue with the campaign if you removed Kaepernick. Frankly, nobody would be talking about it so if nothing else, featuring him and having him narrate is an assured way to have this seen by multiples more than it would have been.

Below is a transcription of the full two minute ad. It’s hard to disagree with any of that message, although all of America’s focus seems to be on the messenger himself.