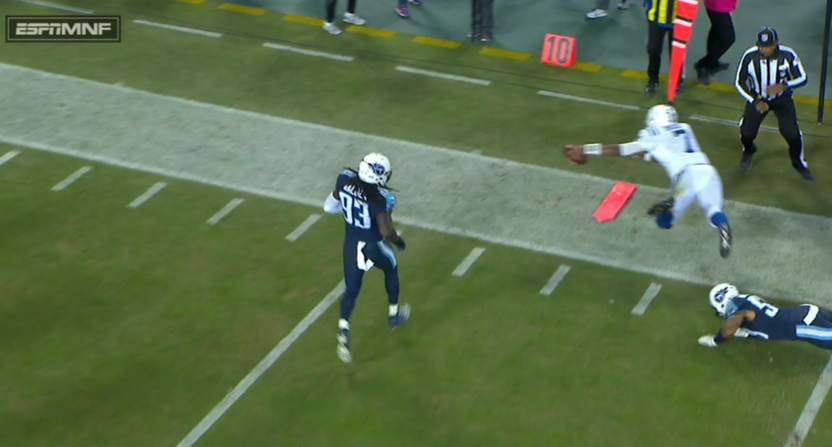 If you didn’t stay up to watch the end of last night’s Colts-Texans Monday Night Football slog, it’s hard to blame you. The AFC South isn’t exactly a glamour division anymore, and though the Titans have been kind of a fun story this year, the Colts have been just about the opposite.

But behind Andrew Luck fill-in Jacoby Brissett, the Colts managed to keep it close, and it was a tie game until the Titans scored to take a 29-22 lead late in the fourth quarter.

Marcus Mariota with an absolute DIME for the 53-yard TD! #INDvsTEN #TitanUp pic.twitter.com/O75blQhmmx

The Colts began a drive, and thanks to an early personal foul, were in business, when they ended up facing short-yardage fourth down situation just before the two-minute warning.

Watching from home, I thought a play-action bootleg made sense, but apparently this is why I shouldn’t be an NFL offensive coordinator, because that’s exactly what the Colts tried:

Brissett may have gotten a bit cute with that; had he cut it hard upfield sooner, he looked to have had the necessary space and angle to pickup the yard. He also took a rather circuitous route after the fake, and those extra steps may have cost him.

Or, actually, maybe not?

Brissett launched himself from behind the line to gain, and pretty clearly remained airborne with the ball extended until the ball crossed what would have been the line to gain. The spot, though, was much farther back, almost comically so:

Good god are human officials good for anything? What a horrible spot.

Between this and the Newton play on Thursday spotting the ball is pointless.

But, as it turned out, the rules might have supported the spot on the field. Gerry Austin said as much right away on the broadcast, bringing up the fact that in situations like these, the relevant rule states that the spot is where the ball crossed the sideline boundary, not where it is when the runner lands out of bounds.

That would seem to preclude plenty of plays where a flying runner extends the ball out to the pylon, for example, though, right? Doesn’t it also eliminate the “goal-line extended” principle? Was any of that ever even a rule?

The NFL just kind of does stuff like this, and like the various incarnations of the catch/not a catch debate, there’s not going to be a satisfactory resolution. The NFL as a sport relies upon the kind of inexact science so apparent that it was referenced in a Budweiser commercial from nearly 15 years ago. (“Spotting the ball is sort of an inexact science.” I tried to find it, but apparently it’s the only commercial from the 2000s to not be on YouTube.)

Even on the replays, there’s no real definitive angle where we could maybe actually see where exactly the ball crossed the sideline, if that’s the correct rules interpretation. In Madden, you’d have to bring up instant replay and do a direct top-down camera to really get the right view, so this isn’t really a surprise. But we should be able to intuit a bit more, and it does seem like Brissett was probably farther forward than he ended up being given. (In fact, after the Colts challenged, the referee ruled that the call on the field stood, as opposed to being confirmed, further evidence that they didn’t really know what to do with what they had in front of them.)

The Colts still had two timeouts and the two-minute warning, but the Titans hilariously scored on a lengthy Derrick Henry touchdown:

Had he intentionally gone down short of the goal line, the Titans could have gone to the victory formation for the win, and everyone who took the Colts +7.5 would have had a much better evening. But Henry just took it to the house, the Colts couldn’t put anything together in the remaining seconds, and that was that.

Except we still don’t know how to spot the ball. It’s shocking, really, that it’s just accepted. It’s a fundamental, cornerstone function of this gigantic, billion-dollar business whose impact on our society is only being more clearly illustrated this year, yet no one really knows where the ball should be sometimes. The officials do a pretty good job given what they’re asked to do, but it’s just too difficult a job. Baseball has a similar issue with balls and strikes. But we just kind of accept it.

I’m not saying there’s anything right or wrong about that. It’s just weird to think about.