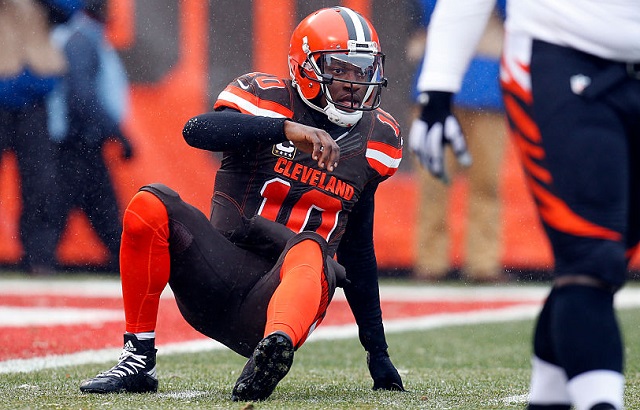 Quarterback Robert Griffin III saw his first action with the Cleveland Browns since Week 1, when he broke a bone in his left shoulder against the Philadelphia Eagles and was placed on injured reserve. But the Browns were optimistic that the injury would not be season-ending and indeed, their assumption proved correct. Griffin had spent the last two weeks with ever-increasing practice reps and in Week 13 — Cleveland’s bye week — head coach Hue Jackson handed Griffin the starting job once again.

The hope, it appears, was that Griffin’s return would help spark a Browns team that was winless, the sole 0-12 team in the league. Never mind Griffin’s injury history, nor his inevitable rust having not played since September. Even before that, he hadn’t thrown a pass since 2014 when he was with Washington. It was time for a triumphant comeback. Following Griffin’s injury, the Browns have trotted out a number of quarterbacks — veteran Josh McCown, rookies Cody Kessler and Kevin Hogan, and briefly, off-the-street signing Charlie Whitehurst. All have been in turns ineffective or injured. Kessler himself has just returned from a concussion to serve as Griffin’s backup, while McCown nurses an injured finger.

Griffin’s performance in Week 13 against the Cincinnati Bengals was not an inspiring one. In fact, his and thus the Browns’ first half may have been among the worst offensive showings this season. Griffin helped lead the team to a mere three first downs. Cleveland had no points, just 72 yards (3.3 a play, 2.0 per pass), with Griffin completing only two of his 10 pass attempts, for 20 yards and an interception. He connected with two receivers — tight ends Gary Barnidge and Randall Telfer — and went zero-for-six to his other target, rookie wideout Corey Coleman.

Cleveland's offense with RGIII under center today appears to be "Chuck it and see what happens."

Though the second half was more productive, with the Browns scoring 10 points, including a one-yard touchdown run by Griffin, and running back Isaiah Crowell rushing for 113 yards on 10 carries (including a long run of 42 yards), it was not enough. Griffin ultimately completed just 12 of his 28 pass attempts for 104 yards, one rushing touchdown and zero passing TDs. He threw an interception (which led to a Bengals touchdown) on a flea-flicker into triple coverage from his own end zone intended for Terrelle Pryor. He also took three sacks and seven hits. His trademark escapability was on display only rarely, with seven runs for 31 yards. The Browns lost, 23-10, and are now 0-13 on the season. The only victory was that Griffin came out of the game unscathed.

Despite the dismal performance, Jackson will not be making a move back to Kessler (or McCown), instead vowing to stick with Griffin next week against the Buffalo Bills. At this point, no decision the Browns’ brain trust makes at quarterback will matter much. The season has been out of hand for some time. But clearly, the quarterback carousel is something the Browns are hoping ceases soon. Though things like injuries or a dropped touchdown are unpredictable, few things have hamstrung the Browns this year and the many, many years that preceded it more than their lack of a long-term, stable, talented franchise quarterback.

This ended up as a drop… pic.twitter.com/TzJMesbT0q

Griffin’s appearance in Cleveland raised eyebrows when the Browns picked him up in the spring, but it wasn’t particularly surprising given Jackson’s history of coaching (and coaching up) quarterbacks and his fondness for reclamation projects,  further established during his years with the Bengals. But it also was not surprising when Griffin fell injured in his first start. It was obvious, as soon as he had to be spelled by McCown, that the Browns would have trouble at their most troubling position, for yet another year.

Criticism has been loud and easy to find when it comes to how the new Browns administration approached the quarterback position. Instead of using the No. 2 pick in the 2016 draft on Carson Wentz, they traded that pick away to the Philadelphia Eagles, who took the quarterback themselves. They reportedly didn’t have any interest whatsoever in Dak Prescott, the fourth-rounder who is now starting for the Dallas Cowboys and in the race for the season’s Most Valuable Player. In 2014, a whole different organizational structure chose Johnny Manziel in Round 1, eschewing Teddy Bridgewater and Derek Carr. This year, they used a third-round pick on Kessler, whose eight starts have produced six touchdowns and two interceptions — all while being sacked 19 times by a made-over offensive line.

Things like the ascendance of Carr, Prescott and even Russell Wilson in Seattle — and the failures by the likes of Blake Bortles, Christian Ponder and Blaine Gabbert — have proven that long-term answers at quarterback don’t necessarily come from Round 1, 100 percent of the time. But the key to any quarterback chosen, via draft or free agency, is that it has to work out, especially if that quarterback has been tapped to start. So that doesn’t mean that the Browns must use their first-round pick on the position (their needs are many, particularly where pass-rush, run-stopping and the offensive line are concerned), but the time must come for the team to find The Man somewhere, anywhere. That’s what the legacy of Jackson et al., will ultimately hinge.

The Browns seem poised to be the first team since the 2008 Detroit Lions to go 0-16 on a season. But losses are not guaranteed. Their Week 15 opponent, the Bills, may find themselves in turmoil in short order, given reports that head coach Rex Ryan could be out the door this week and quarterback Tyrod Taylor benched. In Week 16, Cleveland hosts the San Diego Chargers, whose spate of poor injury luck has yet to let up. But time is running out for the Browns to notch their first, and perhaps only, victory of the 2016 season. The clock to find a quarterback, though, continues to run — 18 years and counting.