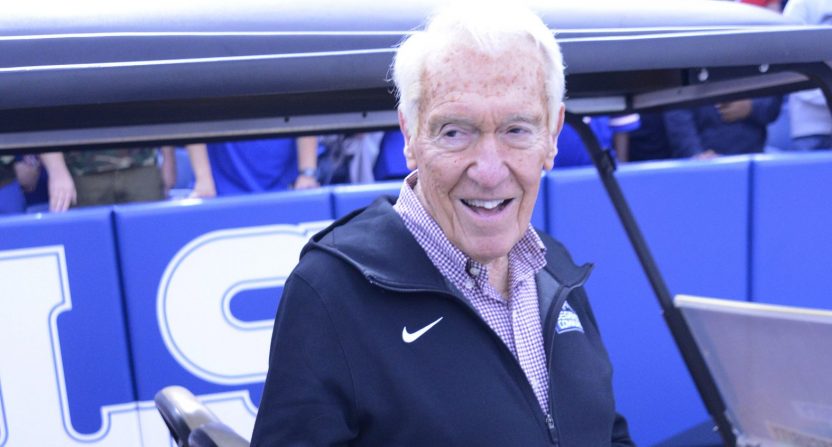 With that in mind, here’s how we rank those who have yet to win a ring, and those who never did.

1. Marv Levy: He never won a Vince Lombardi Trophy, but Levy is the only coach ever to lead his team to four consecutive Super Bowls. That’s why he’s in the Pro Football Hall of Fame.

2. Bud Grant: He took the Vikings to four Super Bowls and put together 11 winning seasons in a 13-year span during the Purple People Eater days. But he never won the big one. Still, he’s a Hall of Famer.

3. George Allen: The Hall of Famer has the fourth-highest qualified regular-season winning percentage in NFL history (.712). He had zero losing seasons in 12 years coaching the Rams and Redskins, but he ran into the perfect Dolphins in his only Super Bowl in 1972.

4. Chuck Knox: The longtime Rams, Bills, and Seahawks head coach is the only man in history with three coach of the year awards but zero Super Bowl rings.

6. Mike Zimmer: His .599 career winning percentage is the highest among active head coaches without a championship. He went 7-9 in his debut in 2014, but hasn’t had a losing season since in Minnesota.

7. Dan Reeves: Only nine coaches have more playoff wins than Reeves, who made and lost four Super Bowls during his 23-year head-coaching career with the Broncos, Giants, and Falcons.

8. Marty Schottenheimer: The only head coach in NFL history with 200 regular-season wins but no titles never even made a Super Bowl despite posting a losing record just twice in his 21-year career.

9. Don Coryell: He’s a legend for the offense he devised, but he also went to the playoffs six times in a nine-year span and posted six double-digit-win seasons with the Cardinals and Chargers.

10. Red Miller: He took the Broncos took the Super Bowl in his debut season in 1977, and he never had a losing season in four years in Denver. His record looks a lot like Harbaugh’s.

11. Bruce Arians: The two-time Coach of the Year is a quarterback whisperer who revives bad teams. He’s won at least seven games in all seven of his seasons, even with some not-very-good squads.

12. Ron Rivera: The two-time Coach of the Year led the Panthers to the Super Bowl in a 15-1 2015 season, and posted a stellar .546 winning percentage during his nine years there.

Best active head coaches who have yet to win a ring

1. Mike Zimmer, Minnesota Vikings: This was his third double-digit-win season in the last five, and he now has a couple playoff wins under his belt. His .599 regular-season winning percentage is the highest among active coaches without a championship.

2. Bruce Arians, Tampa Bay Buccaneers: He’s one of just 11 coaches in NFL history with multiple Coach of the Year awards.

3. Ron Rivera, Washington Redskins: So is he.

4. Sean McVay, Los Angeles Rams: He took the high-powered Rams to the Super Bowl in just his second season on the job and was a Coach of the Year at the age of 31. His regular-season winning percentage of .667 ranks third among active coaches with at least 20 games under their belt.

5. Kyle Shanahan, San Francisco 49ers: The Super Bowl LIV loser has already established himself as one of the best offensive minds in the modern game. We’re projecting here, as there were some hiccups in his first two seasons on the job.

6. Frank Reich, Indianapolis Colts: He’s done a phenomenal job despite plenty of turbulence the last two years in Indy. It’s only a matter of time.

7. Matt LaFleur, Green Bay Packers: It’s really early, but a 13-3 debut and an initial playoff win is big for LaFleur, who is off to one of the best head-coaching starts in league history.

8. Dan Quinn, Atlanta Falcons: He took the Falcons to the Super Bowl in 2016 and got back to the playoffs the next year as well. That gets him into the last spot.