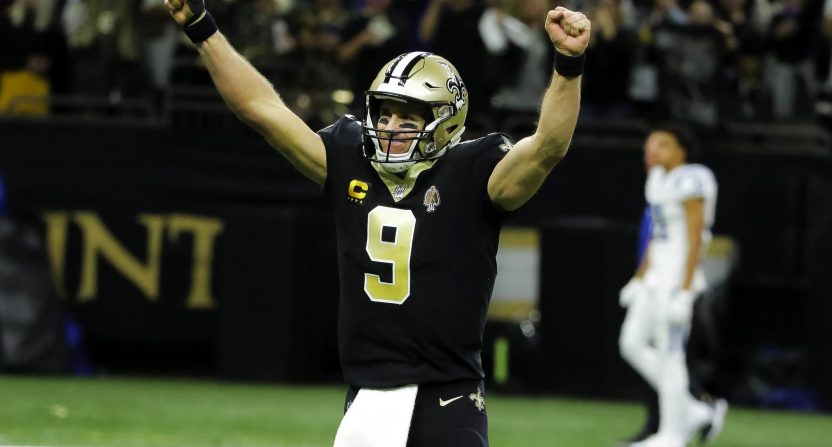 Tom Brady may be the talk of the town among veteran QB’s this offseason but one QB pondering his future was Drew Brees. The new touchdown passing leader has been with the Saints since 2006 but the 41-year-old is at a crossroads. Speculation about Brees retiring to become an analyst has been a thing for years but reports from this offseason has had to have made Brees seriously think about a post-playing career.

Brees revealed on his Instagram account that he is not only coming back to play but is coming back to New Orleans to “make another run at it!” Brees still has at least a couple good years left in him and the Saints would definitely welcome him back, it’s just that Brees coming back may have unintended consequences to the Saints’ long-term after he retires. Namely, the status of backup QB’s Teddy Bridgewater and Taysom Hill.

Bridgewater is an unrestricted free agent and Hill is a restricted free agent so it’s no guarantee all three QB’s are staying in New Orleans this upcoming season. It’s imperative that the Saints keep one of these two QB’s as they make plans for a post-Brees era but can that happen? And if so, who would they pick if they could only choose one?

Bridgewater and Hill have different styles and both carry their strengths and weaknesses, as well as risks. Bridgewater is the more conventional quarterback and has starting QB experience when he was with the Vikings. That was five years ago and after an ACL tear in 2016, Bridgewater has been a backup since.

Despite that, Bridgewater has proven to be a capable backup to Brees and even put up similar stats as Brees when he started five games in 2019. It also doesn’t hurt for Bridgewater to be learning from one of the greatest QB’s in NFL history. Given Bridgewater is 27, if he can be assured by the team he’s the starter whenever Brees retires, Bridgewater can see himself in a great situation leading a playoff capable team for years to come.

Taysom Hill is the definition of high risk/high reward. His hype has been high over the past few months and depending on who you talk to, Hill is like the next thing to being the perfect player. Someone who can throw, run, catch, etc., Taysom Hill can be the next Lamar Jackson (despite being six years older than Jackson). On the other side of the coin, you also have to factor that Hill has played three seasons and has 119 career passing yards. Granted, Hill has done more than just pass but the Saints tend to see him less of a QB and more of a utility player. And if Bridgewater is the QB in waiting, Hill might get playing time but he isn’t going to be passing that often in New Orleans.

If the Saints can convince Hill to continue being a utilityman, there’s a chance the team can keep all three players at least for this season. If Hill wants to be more of a quarterback, the Saints may need to make some tough choices. The Saints clearly feel like they got three great players so despite the doom and gloom perception, they have a great problem. Not many teams have their future QB handy and the Saints potentially have two.

At this point, it’s all about how much risk the Saints are willing to take. Do they take the safe option and go for an above average Teddy Bridgewater who would get better as he enters his prime or do they take the risk and go for the QB who hasn’t thrown often but might wind up being a gamechanger? With the hype being so high, the Saints might fare better to try and keep Bridgewater for the long-term while seeking a trade on Hill so the Saints can at least pick up something in return for the restricted free agent. If the Saints do this, it’ll be a lot smoother transition from one franchise quarterback to the other than what’s happened on other teams.