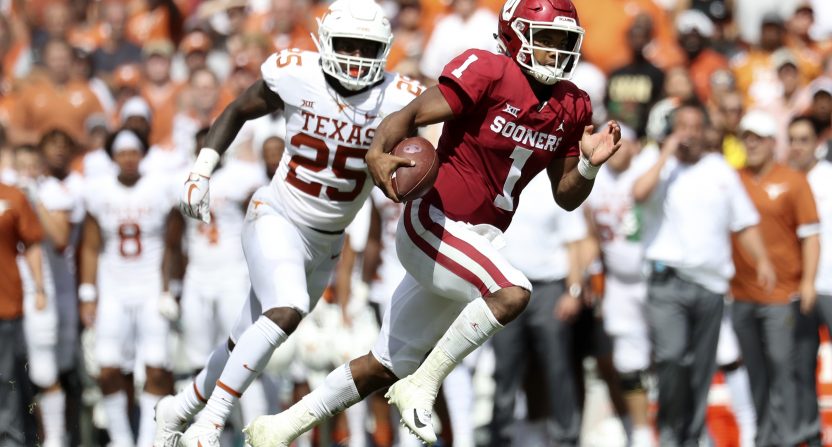 Murray, an outfield prospect, was selected ninth overall by the A’s in the 2018 MLB First-Year Player Draft. He signed a $4.66 million deal with Oakland. But he’s better known for his football abilities, especially after winning a little thing called the Heisman Trophy this season for putting together a ridiculous season at quarterback for the Sooners.

And Slusser reports that one source said Murray is leaning toward football:

One source told The Chronicle that Murray, a possible first-round NFL pick, is leaning toward football.

In December, baseball superagent Scott Boras said that — his client — Murray will join the A’s for the upcoming Spring Training. And that could still end up being true, but Wednesday night’s reports would make it seem a bit less certain, especially with the NFL Combine scheduled for late February. Murray would have to return his signing bonus with the A’s if he chooses to play football.

It’s possible that a very weak quarterback class — that got weaker with Justin Herbert returning to Oregon — could increase Murray’s interest in entering the NFL Draft. One NFL general manager told Pro Football Talk on Wednesday that Murray will be a first-round pick.

Text from a G.M. on Kyler Murray: He'll be a first-round pick.

Optimum Scouting’s Erik Galko thinks Murray will go even higher in the NFL Draft than he did in the MLB Draft at ninth overall:

Prediction: Kyler Murray will be drafted higher in the 2019 #NFLDraft than he was drafted in the 2018 MLB Draft (9th overall).

How about the Arizona Cardinals’ brand-new coach, Kliff Kingsbury? The former Texas Tech coach said in October that he’d take Murray with the No. 1 pick. And guess what?! The Cardinals have the No. 1 pick in the 2019 NFL Draft.

In October 2018, Kliff Kingsbury said he would take Kyler Murray as the first pick of the NFL draft if he could.

There's a San Francisco Chronicle report that he's expected to declare and Kingsbury's @AZCardinals are first on the clock 👀 pic.twitter.com/ERF1lFz5qg

These opinions speak to just how incredibly talented and electrifying Murray is, as his listed 5’10” should — in theory — be a concern at the quarterback position. But we’ve seen “short” quarterbacks in recent years — like Drew Brees and Russell Wilson — prove that height doesn’t matter nearly as much as evaluators used to believe, especially if the player is available to use mobility to create throwing lanes.

Kyler Murray is reportedly going to enter the NFL draft after being drafted 9th overall in the MLB draft last year.

No player has ever been a 1st-round pick in both the NFL and MLB drafts. H/T @EliasSports pic.twitter.com/uwqeKBaCiu