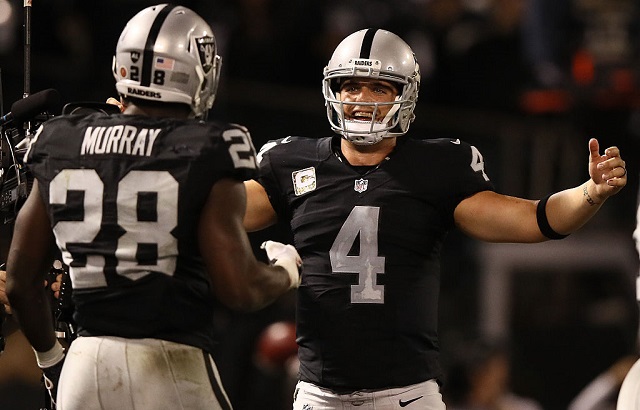 The Oakland Raiders came into their first Sunday Night Football appearance since 2006 in a tie for first place in the AFC West with the Denver Broncos, but there were still critics who were unsure of the Silver and Black despite their 6-2 record. Losses at home to the Atlanta Falcons and Kansas City Chiefs, along with a lack of convincing wins over teams with winning records, had kept some level of doubt in the Raiders before they took on the defending Super Bowl champion Broncos.

In their long-awaited return to SNF, the Raiders proved that they are contenders in the AFC with a wire-to-wire win over the Broncos. Stellar play from the previously struggling defense and a monster performance from an offensive line that opened massive holes for running back Latavius Murray led to the Raiders demonstrating they are good enough to make a run against the best teams in the league.

The Raiders forced Broncos quarterback Trevor Siemian into three consecutive three-and-outs to open the game, a streak that allowed Derek Carr to go to work and build an early 13-0 lead. At the end of the night, head coach Jack Del Rio and the Raiders earned what was a second straight win over the Broncos, dating back to late in the 2015 season, shifting the balance of power in the AFC West towards the Bay Area.

After years of Broncos dominance in the division, it finally appears to be the Raiders’ year after a decade-plus of suffering for the franchise. The late years of the great Al Davis were filled with losing seasons, and his death started a rebuilding period under new general manager Reggie McKenzie that is just now paying off. Young stars in Derek Carr, Amari Cooper, Khalil Mack and Latavius Murray all played key roles on Sunday night in a primetime win that yet again showed how far the franchise has come from the struggles of a 13-year playoff drought.

With the win over the Broncos, the Raiders now sit alone atop of the AFC West after Week 9. Their 7-2 record at the bye week also all but guarantees a Wild Card spot with seven games left in the regular season, three more wins now the likely magic number for Oakland to end its lengthy postseason absence in Del Rio’s second season as head coach.

The Raiders will have another chance to build their resume as AFC contenders in primetime after their bye week, visiting Mexico City to face the AFC South-leading Houston Texans on Monday Night Football. If the Raiders can manage to win at Azteca Stadium over Brock Osweiler, their race to the end of the regular season will be that much easier.

The only question is if the Raiders can continue to play at this high level all season and potentially elevate things further if they want to take the final step on a path to a dream postseason run. Raiders teams have blown quick starts during their 13-year drought, namely Hue Jackson’s 2011 team that wasted a 7-4 start to miss the playoffs in a three-way tie at 8-8. However, this rebuilt team fits the bill of a worst-to-first contender that could not only cruise to the playoffs, but potentially make a run once they get to January.

This Raiders team is built to win a Super Bowl right now with one of Pro Football Focus’ top-ranked offensive lines and a quarterback in Carr that is playing at an elite level this season. Oakland has also added a long list of veterans with playoff experience such as Malcolm Smith, Bruce Irvin, Kelechi Osemele and Malcolm Crabtree who will have this team prepared come January.

Luckily for the Raiders, the young stars on their roster will be given plenty of big tests in a second half of the season that will challenge a team that has been on fire all year. Four games against playoff teams from last season and three divisional games on the road will ensure the Raiders are battle-tested by the time any potential postseason run comes to fruition. If the Raiders are amongst the AFC’s six playoff teams, they will have proved they are contenders by surviving a gauntlet that still includes rematches with the Chiefs, Broncos, and Chargers on the road, in addition to a game at the Coliseum against the defending NFC champion Carolina Panthers.

After a dominant win against the Broncos in which the Raiders outclassed the defending Super Bowl champs, we should no longer question if this young and exciting team is good enough to contend this season. Young stars in Carr, Cooper, and Mack are ready right now to battle with the likes of the Broncos, Chiefs, Steelers and Patriots for the AFC title. When the dust settles this winter, it could be the long-suffering Raiders who are right in the mix for a Super Bowl appearance in a conference that is up for grabs after nine weeks.