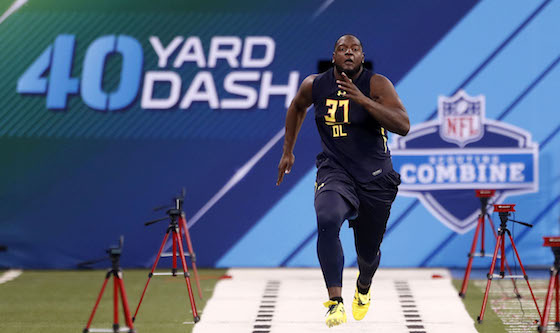 Apparently it went well, because this morning ESPN’s Adam Schefter reported that Mayock will indeed be Oakland’s general manager.

Raiders are hiring NFL Network draft analyst Mike Mayock as their general manager, league sources tell ESPN. The announcement will be made as early as today.

While on the surface this seems to have happened quickly, Schefter noted that Mayock was already familiar with Gruden and the Raiders operation, thanks to a stint last summer observing the team.

New Raiders’ GM Mike Mayock once interviewed and met with Al Davis for the same job he is getting now. Mayock spent part of last summer with the Raiders, observing Jon Gruden. Now will be working directly with him.

Jon Gruden talking Sunday about his new GM Mike Mayock: “He loves it. He’s a passionate, passionate personnel man. He’s done it for a long time. I know he’s had opportunities to get back into the NFL as a general manager and we’ll see what happens. We’ll see how the dust settles”

As we wrote last night, Mayock is entering a particularly volatile situation with the Raiders:

There are still a lot of questions with this GM job, though, from Gruden’s involvement on the personnel side to where they’ll play next season (everything from San Francisco to London has been floated). And there’s the challenge of taking a job with a team that’s about to move for a year, and then about to move again to Las Vegas in 2020; that’s not an ideal living situation for everyone. This report does suggest there’s a fair bit of interest in the job still, though, and that’s good for the Raiders. We’ll see who they wind up picking, but whoever it is is going to have some work to do.

The Raiders stacking their team leadership with people who were out of the game and working in television for a long time is certainly an interesting choice. It also remains to be seen just how much authority a general manager has in an organization where Jon Gruden wields a ton of power. But hey, Mayock will certainly have a lot of draft picks to play with, even if they’re not as valuable as they may have been when they were acquired.