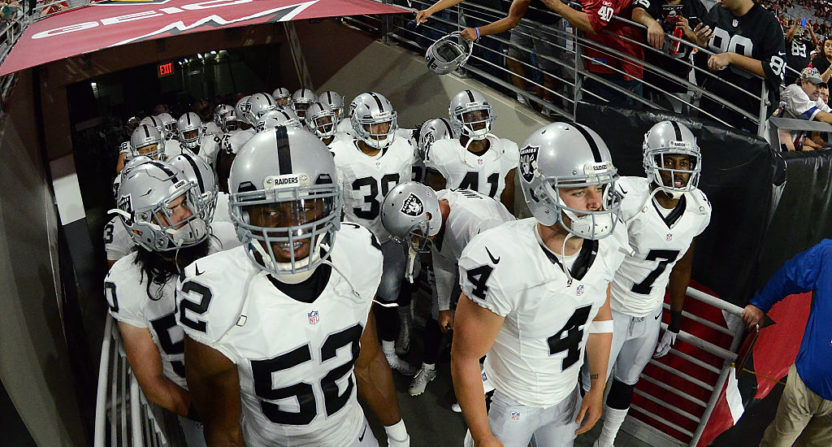 For the first time since 2002, the Oakland Raiders actually got to participate in a playoff game last season. And what did the franchise do to thank the support of their loyal fans in Oakland? They said thanks but no thanks, we’re moving to Las Vegas.

The Raiders won’t be making the trek to Sin City for at least another two years, but the knife they stuck in the backs of their fans was pretty brutal.

Heading into 2017, Oakland feels pretty good about their chances at possibly winning the franchise’s fourth Super Bowl. And why should they not? They have a stud, young quarterback in Derek Carr, a hometown hero in running back Marshawn Lynch, and a havoc-wreaking monster on defense in linebacker Khalil Mack.

So everything seems to be ready for the Raiders to make a real run this year, right?

Well, not so fast. Oakland will actually need a lot of luck to earn back-to-back playoff appearances this year.

First things first, some have forgotten that Carr broke his leg less than eight months ago. He has already come out and said the injury is healed and will not be a worry in 2017, but could it possibly mess with his psyche on the field?

Will Carr be more tentative when it comes to scrambling or will he take more sacks to avoid a pounding hit from his blindside? Plus, if he gets injured again and has to miss a few games, the Raiders’ season could be thrown for a loop unless backups Connor Cook or EJ Manuel find some way to magically lead the team to wins in Carr’s absence.

Marshawn Lynch is one of the best things to ever happen to the NFL. But is everyone really convinced that a 31-year-old running back, who has been out of the league for a year, will actually be a factor for the Raiders in 2017?

It really depends how Oakland decides to use him and how often they have him out on the field. Still, it is just hard to get excited about a guy who averaged only 3.8 yards per carry in 2015.

If Lynch does not end up working out like the Raiders had hoped, the team does have two other semi-talented running backs in Jalen Richard and DeAndre Washington. Both played sparingly last year, but can they be relied on if given a larger role this season?

Up front, Oakland possessed one of the league’s most talented offensive lines last year. In 2017, their continued success may depend on who the team’s starting right tackle will be.

It was Austin Howard’s job for the majority of the 2016 season, but the Raiders added former New York Giants tackle Marshall Newhouse during free agency this offseason to compete for the job. Then again, neither of these two may end up as Oakland’s starter on the right side of the line, as the team may opt to go with a younger, less experienced player like Vadal Alexander or Jylan Ware.

On the defensive side of the ball, the Raiders are led by Mack and fellow scary linebacker Bruce Irvin. But Oakland’s defense is most definitely not the strongest part of their team.

The Raiders cannot have a repeat of last year’s defensive performance in 2017, especially since they have to match up against some the NFL’s top offenses including the Washington Redskins, New England Patriots, Buffalo Bills, and Los Angeles Chargers (twice).

In nine of their 16 games last season, the Raiders entered the fourth quarter trailing, thanks mostly to their defense. Luckily for Oakland, though, Carr was able to lead the team to comebacks and emerge victorious in seven of those nine games.

So in more than half of their games last year, the Raiders relied on their quarterback to get them out the hole that the team’s defense had created. Good luck to those comebacks happening again in 2017 when they have to face the tough defenses of the Denver Broncos (twice), Kansas City Chiefs (twice), Baltimore Ravens, and Philadelphia Eagles.

For all of those football talking heads who are just automatically penciling in Oakland as the AFC West champ this season, maybe look a little deeper into a team that has a tough road ahead of them in 2017.