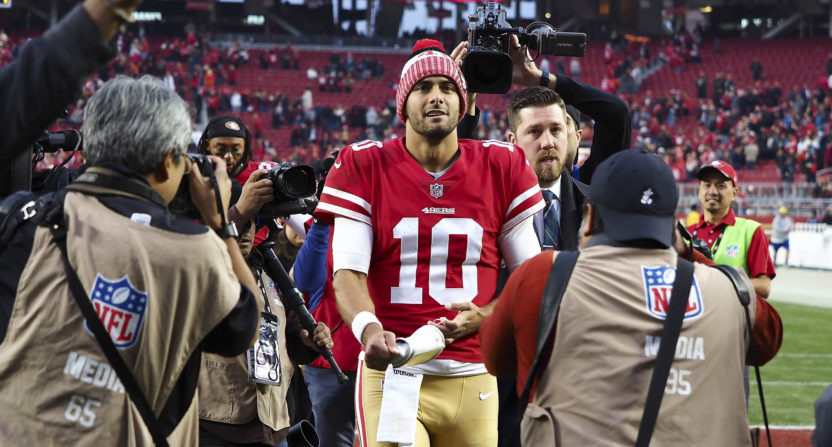 Previously in our offseason summaries, we covered the AFC — East, North, South and West — and are now looking at the NFC. We began in the East, trekked through the North and migrated down South, and finish off out west. The Los Angeles Rams were a surprise contender out of the NFC West, but the 49ers are on the rise with quarterback Jimmy Garoppolo. The Seahawks are trending downward, while it looks like rebuild time for the Cardinals.

Projected salary cap space: $22 million — Just back of the middle of the pack.

Key needs: Quarterback (they literally don’t have one), wide receiver (the Brown twins could walk and Larry Fitzgerald is 90), offensive line (have to bolster protection for whoever they bring in at quarterback) and cornerback (particularly if they lose Williams and Justin Bethel).

Draft breakdown: Arizona selects 15th in Round 1, but doesn’t have picks in the fourth, fifth or sixth round.

Other potential priorities: Something has to be done about Tyrann Mathieu’s $14.1 million cap hit, and Mike Iupati is far too expensive as well.

Outlook: The Cardinals still have talent in the secondary and the offensive backfield, but that’s about it. This is a rebuild.

What’s new? They’re coming off a winning season for the first time since 2004, when they resided in St. Louis.

Key needs: Secondary (especially if they lose most or all of the three defensive backs listed above), interior offensive line, defensive front seven.

Draft breakdown: The Rams pick 23rd, lack a second-rounder but have three selections in the sixth round.

Other potential priorities: They could hit either Watkins or Joyner with the franchise tag.

Outlook: Plenty of opportunities for a good team to get even better, although they’ll likely have to spend most of their money keeping guys. That’s fine — the core is there.

Draft breakdown: San Francisco picks ninth or 10th (to be decided by a coin flip) and have one selection in every other round except the sixth.

Other potential priorities: The 49ers will have to decide what to do about talented young linebacker Reuben Foster, who probably faces a lengthy suspension following a second arrest in less than a month.

Outlook: Rarely do you see this much excitement about a team coming off a 6-10 season, but the 49ers have their quarterback, a ton of momentum, oodles of dollars to spend and some draft capital too. General manager John Lynch has a chance to turn this team into a contender immediately.

Key needs: Secondary (for once), defensive line (Sheldon Richardson is a free agent, Cliff Avril’s future is in doubt and Michael Bennett is 32), offensive line (as per usual), tight end (if Graham gets away), wide receiver and running back.

Draft breakdown: Seattle picks 18th but has no second- or third-round selections.

Other potential priorities: Richard Sherman is slated to count $13.2 million against the cap. Might they finally pull the trigger on a trade?

Outlook: The Legion of Boom could be broken up. Those guys have been dealing with injuries and the aging process and there isn’t much the Seahawks can do about that right now. With limited draft or real-world capital, they’re likely to get worse before they get better on both sides of the ball. Poor Russell Wilson.