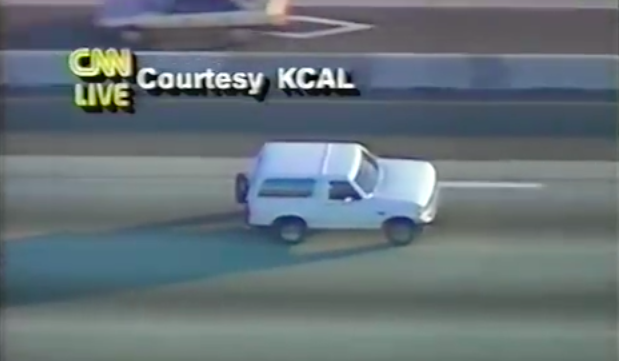 Quick, name the most infamous cars in American history.

We don’t mean the makes or models, we mean the literal cars themselves. Maybe the 1961 Lincoln 74A that JFK was sitting in when he was assassinated comes to mind. Perhaps you think of the bullet-riddled Ford Model 730 Deluxe Sedan that Bonnie & Clyde left behind.

No matter how many cars you name, we’re willing to bet the 1993 Ford Bronco driven by Al Cowlings that held O.J. Simpson in the back while it cruised across Los Angeles before he surrendered is near the top of your list.

The question is, what happened to it?

While ESPN’s O.J.: Made in America documentary wows audiences, interest in pieces of iconic American pop culture like the Ford Bronco are up. Thanks to Darren Rovell, now we know all the details.

It wasn’t a secret what happened to the Bronco, it’s just that the people who have it haven’t done much with it. Instead of hiding it where no one could ever find it, they hid the vehicle in plain sight.

Rovell notes that the fate of the vehicle was almost as gruesome as the details in the O.J. murder case itself.

After the chase, but before the trial, Cowlings had received an offer from a company called Startifacts out of Minnesota. Its founder, Michael Kronick, had offered Cowlings $75,000 for the car and a deal was struck.

“But we found out that the company was going to rent the vehicle to a company in L.A. called Grave Line Tours, that visited famous graves,” Gilbert said. “They were going to re-enact the chase with the Bronco and then take people to Nicole’s grave. The trial hadn’t taken place yet, and we didn’t want people thinking anyone associated with O.J. did this.”

Simpson’s former agent Mike Gilbert and and two of Al Cowlings’ friends ended up ponying up $75,000 to purchase the vehicle for themselves. Despite receiving offers has high as $275,000 over the years, they haven’t sold.

Instead, they’ve maintained the vehicle, replacing the battery and tires and putting minimal mileage on it. The car mostly sat in a parking garage until someone tipped off the Luxor Hotel in Las Vegas. Gilbert and the other owners loaned the Bronco to the casino briefly where it was part of a sports exhibit.

After some time in a  Las Vegas parking lot, Gilbert brought the car to his Hanford, California home and it’s been parked there since.

It should be noted that Gilbert knows what he’s got. He hasn’t just maintained the car. He’s also kept plenty of items from that fateful day, including the license plates, the tires and even the gas that was left in the tank following the chase.

If you want to see the Bronco in person, plan a trip to the Alcatraz East Crime Museum in Pigeon Forge, Tennessee. They’ll be hosting the vehicle through a loan from the owners. However it sounds like Gilbert is open to selling the car now, perhaps realizing interest might be peaking thanks to FX’s American Crime Story and the ESPN documentary.

Whatever happens, the Bronco is destined to be a macabre publicity draw wherever it is, be it a casino, museum or some random parking garage near you.