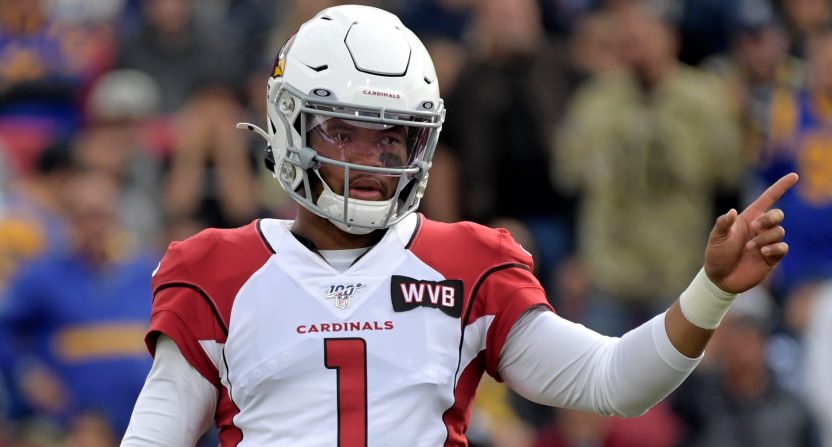 One year later, what if every team that held a first-round pick heading into the opening round of the 2019 NFL Draft could have a do-over?

Using current rosters minus the 2019 rookie class, here’s how things would play out, excluding draft-night trades:

1. Arizona Cardinals: QB Kyler Murray, Oklahoma — He’s not a sure-thing yet, but he was still the Offensive Player of the Year and is on the right track.

2. San Francisco 49ers: Edge Nick Bosa, Ohio State — The Defensive Rookie of the Year was a dominant force for a Super Bowl defense in 2019.

4. Oakland Raiders: LB Devin Bush Jr., Michigan — The 21-year-old was all over the field in a 109-tackle rookie season. It also became obvious Clelin Ferrell was a reach here.

5. Tampa Bay Buccaneers: DT Dexter Lawrence, Clemson — As a 16-game starter with the Giants in 2019, Lawrence was a tremendous bright spot on a bad defense.

6. New York Giants: WR A.J. Brown, Mississippi — He went over 1,000 yards with eight touchdowns, and was one of the league’s most potent offensive weapons as a rookie in Tennessee. The Giants can get their quarterback in 2020.

7. Jacksonville Jaguars: WR DK Metcalf, Mississippi — The freakish athlete really came on late in his rookie campaign in Seattle, and looks as though he’ll become a star in 2020.

8. Detroit Lions: LB Devin White, LSU — The actual No. 5 overall pick exhibited tremendous range and a strong nose for the ball in a promising rookie season that got better as it wore on in Tampa.

9. Buffalo Bills: DT Christian Wilkins, Clemson — Nothing wrong with Ed Oliver here, but Wilkins showed even more potential as a rookie in Miami.

15. Washington Redskins: WR Terry McLaurin, Ohio State — Scary Terry went over 900 yards with seven touchdowns as a rookie. They wouldn’t get him in the third round this time. Too many doubts about both Daniel Jones and Dwayne Haskins to go quarterback this early.

16. Carolina Panthers: Edge Brian Burns, Florida State — Burns has yet to become a star, but the Panthers still look like they got this pick right. He flashed significantly when he was healthy as a 21-year-old rookie.

17. New York Giants: DT Jeffery Simmons, Mississippi State — Instead of the already-selected Dexter Lawrence. The future is very bright considering how well he performed coming back from a torn ACL in 2019.

18. Minnesota Vikings: C Erik McCoy, Texas A&M — He was a lot better than Garrett Bradbury, who was drafted in the same spot by the same team.

19. Tennessee Titans: DT Ed Oliver, Houston — He has similar upside to Simmons, who in this case went to Carolina.

21. Seattle Seahawks: DE Maxx Crosby, Eastern Michigan — He had double-digit sacks as a rookie in Oakland, and the Seahawks appear as though they’ll lose Jadeveon Clowney.

24. Oakland Raiders: DE Montez Sweat, Mississippi State — He had 7.5 sacks as a rookie and is simply better than Clelin Ferrell, who they took fourth overall.

25. Philadelphia Eagles: RB Josh Jacobs, Alabama — With Sanders gone, you have to pull the trigger on a guy who often looked like a Pro Bowl-caliber back as a rookie.

26. Indianapolis Colts: QB Drew Lock, Missouri — There were signs in 2019 that he could become a franchise quarterback, which is what the Colts are now looking for.

28. Los Angeles Chargers: OL Jonah Williams, Alabama — They could have afforded to wait a year for the two-time first-team All-SEC tackle, who missed all of his rookie season due to a a torn labrum.

29. Seattle Seahawks: WR Mecole Hardman, Georgia — The speedy playmaker replaces Metcalf. He’s not quite as tantalizing, but scored six touchdowns as a rookie in Kansas City.

31. Los Angeles Rams: OT Kaleb McGary, Washington — He actually went in this exact spot to Atlanta. Sure would be nice to have him waiting in the wings right now.