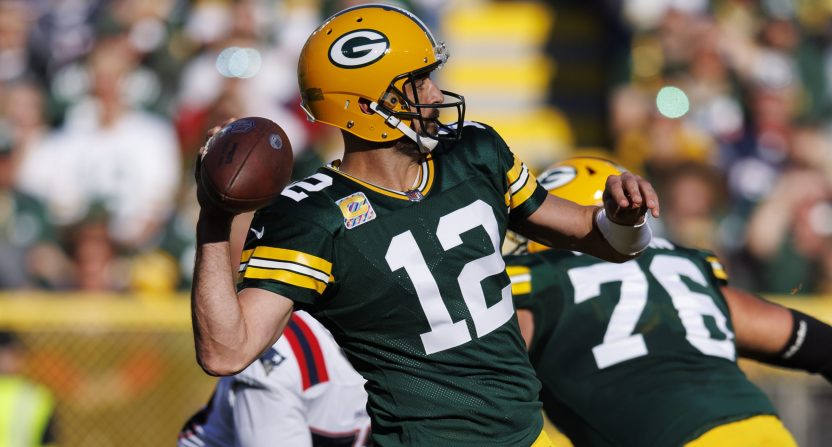 Rodgers came into Sunday’s game against the New England Patriots with 498 passing touchdowns in his career, just two away from the historic 500 passing touchdown list, which only has Tom Brady, Drew Brees, Peyton Manning, and Brett Favre.

Rodgers and the Packers offense got off to an extremely slow start, but he finally got his first touchdown pass of the game with a 20-yard connection with tight end Robert Tonyan.

New England was able to stay in the game despite an injury to Patriots veteran backup quarterback Brian Hoyer, and Rodgers would get his milestone touchdown pass in the fourth quarter to rookie wide receiver Romeo Doubs to tie up the game.

It was a beautiful throw to mark the milestone for Rodgers, and many took to social media to congratulate him for this amazing career feat.

Aaron Rodgers is now the 5th QB ever with 500 TDS pic.twitter.com/v49rN6VxXU

This game is tied with 6:26 left to play. pic.twitter.com/LaJJAau7Bd

That touchdown was a big one.

It was Aaron Rodgers' 500th career touchdown pass, which goes to Romeo Doubs.

Aaron Rodgers adds to his legacy with TD pass No. 500 pic.twitter.com/ih0I124Koi

While Rodgers certainly missed former teammate Davante Adams this season as his top receiving option, this back shoulder throw from Rodgers looked very reminiscent to the connection Rodgers and Adams had while they were teammates.

Dobbs certainly looks like a very promising receiving option for Rodgers, and he will now always have the honor of catching the 500th touchdown pass of Aaron Rodgers moving forward.