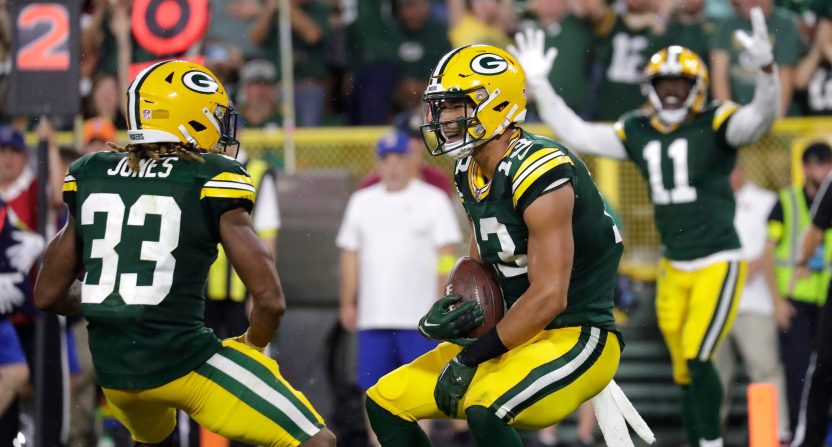 While the Green Bay Packers and Chicago Bears have the NFL’s oldest and most frequently played rivalry, the recent years of the rivalry have been strongly lopsided in Green Bay’s favor. Brett Favre had a 22-10 record against Chicago in his time as Green Bay’s quarterback. His successor, Aaron Rodgers, entered Sunday’s game with a 23-5 mark against the Bears. That’s now 24-5.

Rodgers was 19-for-25 in Week 2’s game on Sunday night, passing for 234 yards with two touchdowns, no interceptions and a 131.1 passer rating. Chicago started strong, opening up a 7-3 lead after the first quarter but that didn’t last long. The Packers quickly took control, outscoring the Bears 21-0 in the second quarter. Chicago did briefly threaten to make the game interesting in the fourth quarter, it didn’t happen.

The Packers came away with a 27-10 win. That was Green Bay’s seventh straight win in the series and during that time, the Packers have outscored the Bears by an average of more than 13 points.

With all of that in mind, many NFL fans couldn’t help but note how much Sunday felt like a rerun.

Aaron Rodgers showing up to dominate the Bears every yearpic.twitter.com/gy7S4Sofd2

This is basically like every Bears/Packers game of my life.

I've been watching this exact Bears-Packers game for the majority of my adult life.

I’m so tired of seeing Bears-Packers on Sunday Night Football every year. Nobody outside of these two fan bases want to see it. The Packers smack them every single time.

As much as things change, some things stay the same.

As historic as the rivalry is, it’s hard to blame anyone for feeling that it’s gotten a little stale and repetitive. The overall tally of the rivalry is close, with Green Bay holding a 104-95-6 edge. But the most recent years have been anything but close.