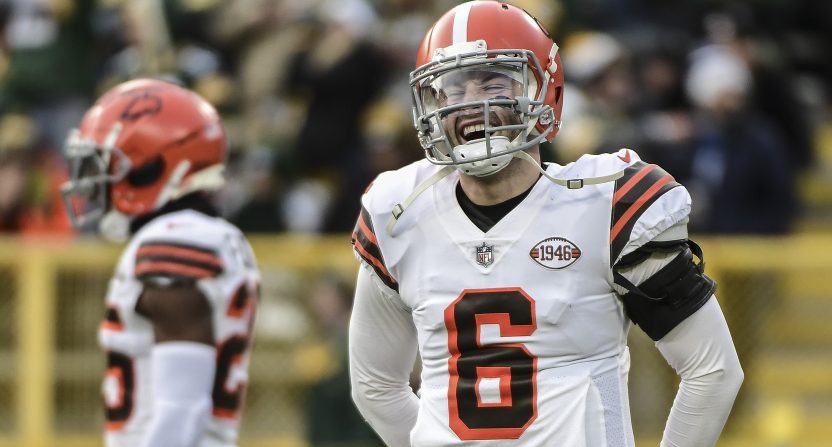 The first half of Saturday’s Christmas Day game between the Cleveland Browns and the Green Bay Packers was dominated by the home Packers, with Browns’ quarterback Baker Mayfield (seen above before the game) tossing three interceptions and Packers’ QB Aaron Rodgers throwing three touchdowns (and moving past Brett Favre for the franchise TD record). That led to Green Bay leading 21-12 at halftime. However, after the half, the Browns made much more of a game of it, with Mayfield throwing two touchdown passes and with the defense holding the Packers to just a field goal in the final two quarters. And Cleveland had a chance to win it in the final minute, but then Mayfield threw another interception on third and 10 from the 50-yard line:

RASUL DOUGLAS IS TOO CLUTCH.

The @packers fourth INT of the game seals the deal on Christmas day! @rd32_era

That led the Packers hang on for a 24-22 win, improving their record to 11-3 on the year and dropping the Browns to 7-7. And yes, it’s somewhat impressive that the Browns rallied here and made a game of this considering the lopsided first half, and Mayfield was much better in the second half than he was in the first, and yes, this was his return after a long COVID-19 protocol absence. But he finished the day with 21 completions on 36 attempts for 222 yards with two touchdowns and four interceptions, not an overall stellar statline. (By contrast, Rodgers completed 24 of 34 passes for 204 yards and three touchdowns with no interceptions.) And he wasn’t able to put the Browns over the top.