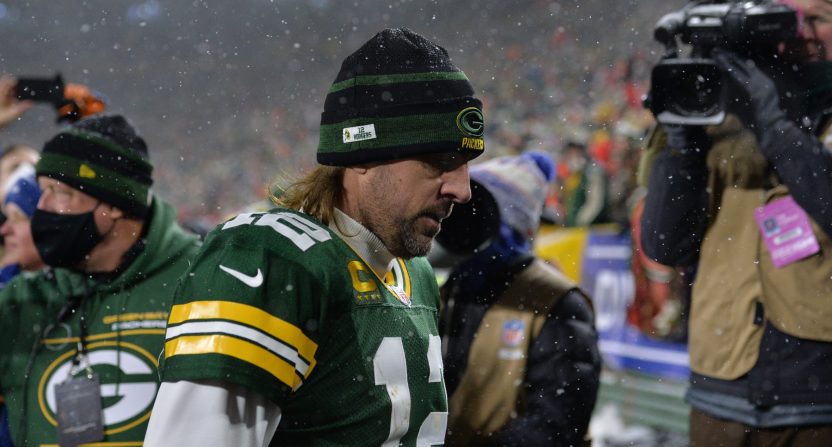 Aaron Rodgers isn’t at the Green Bay Packers‘ organized team practice activities (OTAs) this week, but his head coach Matt LaFleur doesn’t seem to be worried about it.

Rodgers sat out OTAs last year because of contract issues with the team. This year, Rodgers isn’t showing up to the voluntary workouts either. But according to LaFleur, all is still well with the MVP quarterback.

QB Aaron Rodgers is not present for the start of organized team activities and isn’t expected in Green Bay at all this week, according to coach Matt LaFleur. https://t.co/VBvqnM7GLn

“I talked to him last night for a while, which was great just to kind of update him on just where we are and go over a few — like we do every offseason, there’s always tweaks to what you’re doing,” LaFleur said in his Tuesday press conference. “But he’s in great spirits and it was a great conversation. But I wouldn’t anticipate seeing him, at least this week.”

When asked if Rodgers will be making it to camp, the coach said it’s up to the quarterback.

Rodgers isn’t the only veteran missing OTAs this spring. So are NFL stars Deebo Samuel and Kyler Murray, just to name a few. But both of those players are sitting out because of contract disputes.

“Aaron doesn’t need reps at this time of the year. Obviously it’d be nice to have him here, but he’s seen these things 1,000 times and he’ll be ready to go when training camp starts.”