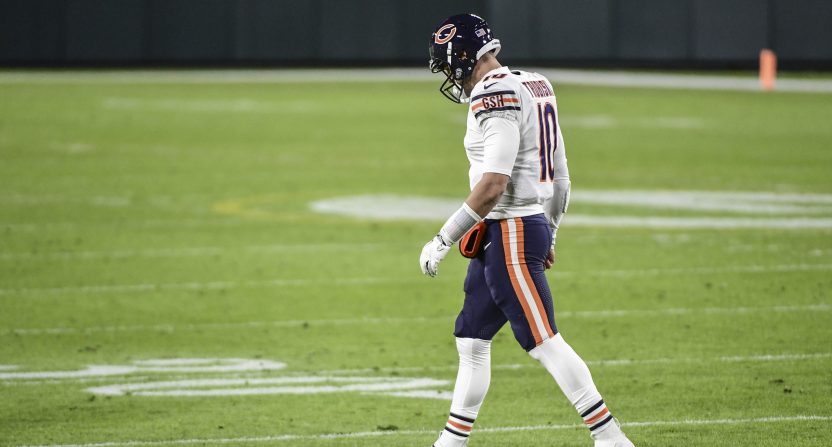 The rivalry between the Chicago Bears and Green Bay Packers should be as good as it gets in sports (and used to be!), but it’s been quite lopsided for a long, long time- because one organization consistently has a great quarterback and the other organization has never had one (or at least since the 1940s with Sid Luckman). And that was clear to see on Sunday Night Football.

The Packers beat the Bears 41-25 at Lambeau Field, in a game that wasn’t nearly as close as the score would indicate. The Packers led 27-3 in the first half, and 41-10 in the third quarter, before the Bears got two garbage time touchdowns. In reality, this game was a beatdown.

The difference in quarterback play was sadly what Bears fans have been used to seeing in these games since Brett Favre became a star quarterback for the Packers in the early 90s.

Aaron Rodgers completed 21-of-29 passes for 211 yards, four touchdowns, no interceptions, and with a 132.3 passer rating. Three of Rodgers’ touchdown passes came in the first half (he would’ve likely thrown for more touchdowns on the night if the game didn’t quickly get out of hand).

We've seen this a time or two: Aaron Rodgers and Davante Adams connect for a touchdown. #SNF pic.twitter.com/8gQQ2mkyKQ

Too easy for Aaron Rodgers. 13-3 Packers lead over the Bears. #SNF pic.twitter.com/zxt8LbBG6k

Aaron Rodgers with touchdown pass No. 3 of the first half. Total domination from the Packers' offense. #SNF pic.twitter.com/0JfIdsT1RU

Mitch Trubisky, on the other hand, was not great. The third-year quarterback completed 26-of-46 passes for three touchdowns (two of which were in garbage time), two interceptions, and had a 74.7 passer rating. The two interceptions were awful downfield passes/arm punts. He also was sacked and fumbled on a play that led to a scoop-and-score for Green Bay (granted, the refs missed a facemask call on that one).

Perfect throw- to the other team. pic.twitter.com/75GyncHOse

Mitch Trubisky yelled out "500!" before throwing this pass, probably. pic.twitter.com/sUPDiM63Ar

These tweets say it all about the quarterbacking gap between the two franchises over the years:

Aaron Rodgers went over 50,000 career passing yards on that TD throw. He's the 11th player in league history to top that mark.

For reference – the #Bears franchise record for career passing yards is 23,443 held, of course, by Jay Cutler.

The Packers improve to 8-3, and would currently be the NFC’s No. 2 seed; they’re one game behind the New Orleans Saints for the No. 1 seed (which features the only automatic bye in this year’s playoff format).

But our biggest takeaway from this game is the mess the Bears are in.

After starting 5-1, the Bears have now lost five straight games, and their offense has been downright abysmal, whether it’s Trubisky or Nick Foles at quarterback. The offensive line has been a mess- largely because it’s been neglected by general manager Ryan Pace in early rounds of the draft for years.

It’s a roster built backwards in the modern NFL, which is all about scoring a lot of points. And head coach Matt Nagy — the former Kansas City Chiefs’ offensive coordinator — has not shown to be an offensive guru capable of making up for roster deficiencies, particularly at the quarterback position (his run scheme has also been heavily questioned, and the run game had been brutal until Sunday night- which actually featured David Montgomery running for 103 yards on 11 carries).

The season-long brutal offensive play (again, in the modern NFL that is all about lighting up the scoreboard), to go with the four-game losing streak entering SNF, should’ve already sounded the alarms on this team’s issues now and going forward. But it’s possible that getting embarrassed by the Packers — yet again — on Sunday Night Football *really* opens up the eyes of George McCaskey and the Bears’ higher-ups.

Matt Nagy and Ryan Pace should have to drive Virgina McCaskey back to Chicago in Mitchell Trubisky's Camry after this team performance.

If they weren’t already, Nagy and Pace are absolutely on the (very) hot seat now.