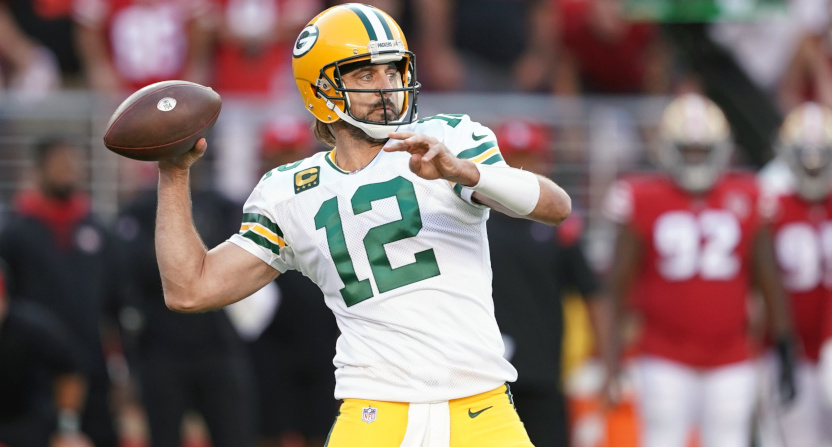 The Green Bay Packers got off to a rough start this NFL season with a 38-3 road loss to the New Orleans Saints (in Jacksonville) that raised a lot of questions, but they’re on a nice rebound since then. That started with a 35-17 win against the Detroit Lions last week on Monday Night Football. And in the primetime Sunday Night Football game this week, they took down the San Francisco 49ers 30-28 on a last-second 51-yard field goal from Mason Crosby, following a tremendous final drive led by two deep passes from quarterback Aaron Rodgers.

A big part of the discussion around the Packers this year has been about Rodgers. And that makes sense, following an offseason where much of the talk was about his bid to host Jeopardy! on a permanent basis. And Rodgers (seen above in the first quarter of Sunday’s game) got off to a real rough start in Week One against the Saints. But he rebounded with four touchdown passes against the Lions in Week Two. And while he was cromulent for most of Sunday’s game, throwing for 219 yards and two touchdowns before the final drive, he really stepped into another gear after getting the ball back on the Green Bay 25 down 28-27 with just 37 seconds left on the clock. First, he hit Davante Adams for 25 yards:

Rodgers not done yet. #GoPackGo

Following that, Rodgers spiked the ball on first down to stop the clock, then threw incomplete on second down for Adams. But on third down, he hit Adams again for 17 yards. And then Crosby nailed a 51-yard field goal to give Green Bay the win:

51 YARDS FOR THE WIN. #GoPackGo pic.twitter.com/mnam33oF7X

The two late passes to Adams were perhaps particularly remarkable considering the brutal (and unflagged) hit Adams took earlier in the quarter:

Davante Adams takes a massive shot to the head from Jimmy Ward. pic.twitter.com/jUdqaHlzyh

How on earth was there no flag on this?!? Davante Adams is still down. Wow.

But Adams was able to come back, and Rodgers found him twice on that final drive. Rodgers finished with 23 completions on 33 attempts (69.7 percent) for 261 yards and two touchdowns, while Adams had a game-high 12 catches for 132 yards and a touchdown. And both were critical to the Packers’ comeback here.