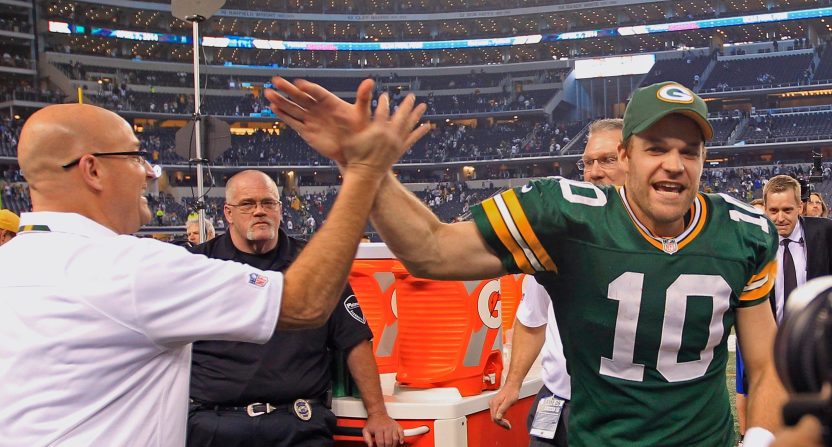 Former Green Bay Packers quarterback Matt Flynn had one of the best statistical games in the history of the NFL in Week 17 of the 2011-12 NFL season. His former teammate Aaron Rodgers revealed some very intriguing information about Flynn’s career-best performance.

Rodgers discussed Flynn’s performance on Tuesday during his weekly appearance on The Pat McAfee Show, saying that he acted as the team’s offensive coordinator for the game.

“I can call a game for another quarterback and I have before,” said Rodgers. “2011, in Week 17, I called a lot of that game. I don’t think that is new news that I had a hand in a lot of those calls. I didn’t do a whole lot, Matt (Flynn) balled out. It was a well-played game for Matty, I’m really happy for him.”

Flynn seems to have taken notice of Rodgers’ comments on his impressive day, as he responded to the full clip on Twitter by hilariously trolling his former teammate.

“Had to audible outta most of them,” Flynn tweeted.

Had to audible outta most of them

That performance was good enough for Matt Flynn to receive a three-year contract from the Seattle Seahawks the following offseason, so he can certainly thank Rodgers for his role in helping Flynn get paid in a big way.

Rodgers certainly has a brilliant mind for football, so coaching could very much be in his future.

Flynn’s career in the NFL was not a long one, but he will always have that awesome game to look back at, and it looks like Aaron Rodgers played a big role in that success.