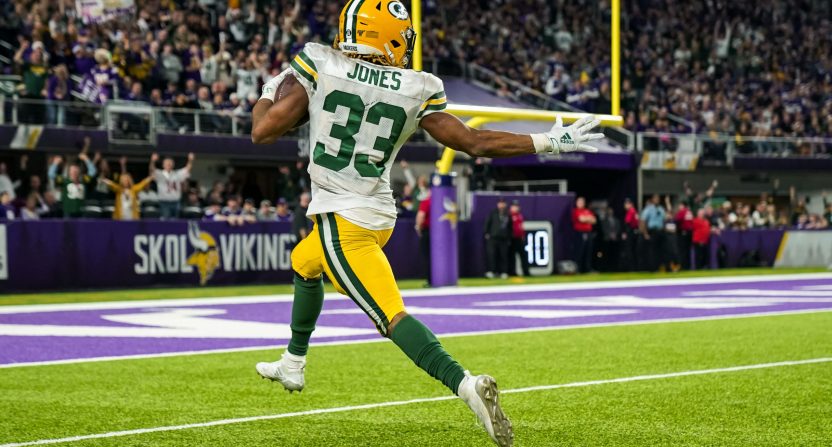 The Green Bay Packers are NFC North champions after taking down the Minnesota Vikings 23-10 on Monday Night Football at U.S. Bank Stadium.

After trailing 10-9 at halftime, Green Bay outscored the Vikings 14-0 in the second half, led by Aaron Jones. The running back had a 12-yard touchdown carry in the third quarter to put Green Bay in front, and had a 56-yard touchdown run in the fourth quarter to serve as the dagger.

Jones finished the night with 154 rushing yards on 23 carries (6.7 AVG), and it was particularly important on a night where Aaron Rodgers and the Green Bay passing attack were unable to do much. Rodgers completed 26-of-40 passes for 216 yards, no touchdowns, one interception, and had a passer rating of 68.3.

The Packers have won two games during the Aaron Rodgers era when he hasn’t thrown a touchdown but has thrown an interception.

2010 NFC Championship Game vs. the Bears

Tonight against the Vikings

With the loss, the Vikings fall to 10-5 and are locked into the NFC’s No. 6 seed. That means going on the road to face the New Orleans Saints, San Francisco 49ers, Seattle Seahawks, or Packers in the first round. So, that’s definitely not favorable, and especially when considering Kirk Cousins’ history.

But things just got much more favorable for the Packers. Green Bay (12-3) just needs a win over David Blough and the Lions to get a first-round bye. That is quite likely to happen. And the Packers even have a realistic path to the top overall seed, needing a win over the Lions and the 49ers to lose to the Seahawks in Seattle (San Francisco opens as a 3-point favorite).

The Green Bay Packers are NFC North champions for the first time since 2016. They beat the Vikings in Minnesota, 23-10. Za'Darius Smith and Aaron Jones are the stars.

A win at Detroit next Sunday secures a first-round bye. A win plus a 49ers loss secures the No. 1 seed.

Even though the Packers’ record suggests they’re as good as anybody in the NFC, the data and eye test would say they’re a level below the Saints and 49ers. So, making teams have to come through Lambeau Field as long as possible would seem to be crucial for the Packers’ chances to go deep into January. And that’s why Monday night’s win is particularly huge for Green Bay.