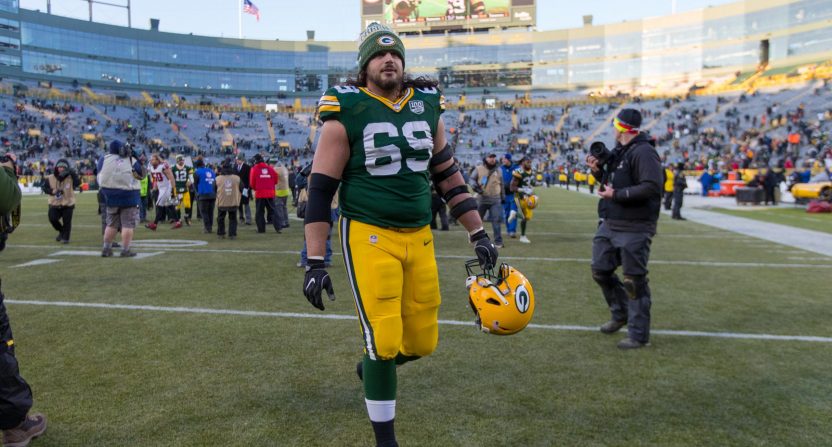 From @NFLTotalAccess: The #Packers have lost LT David Bakhtiari for the season, as the belief is he tore his ACL. One of the best players in the league regardless of position. Terrible news. pic.twitter.com/GiYMgpsMs7

First off, this is awful for Bakhtiari, ending his season right before the title-hopeful Packers are about to enter the playoffs. And his status for the beginning of the 2021 season is very much up in the air.

But it’s a brutal blow for the Packers, who have looked like the team to beat in the NFC side of things and a very legitimate championship contender. Aaron Rodgers has put together an absolutely absurd season that is quite likely to result in his third NFL MVP award, and a big reason for his success has been the Green Bay offensive line giving him time in the pocket. As Rodgers’ blindside protector, the highly reliable Bakhtiari has led the way in that department.

Bakhtiari, 29, is a three-time Pro Bowl selection and was named first-team All-Pro in 2018. He’ll surely be recognized with more awards for his remarkable play in 2020.

The University of Colorado product became the NFL’s highest-paid offensive lineman when he signed a four-year, $105 million contract extension with a $30 million signing bonus.

Without Bakhtiari, things will be much more difficult for Rodgers and the Green Bay offense. That begins Sunday in Week 17 against the Chicago Bears, in a game with massive ramifications for each team: the Bears need to win — unless the Rams beat the Cardinals — to reach the playoffs, and the Packers would clinch the NFC’s No. 1 seed — the only seed with a bye — with a win. Khalil Mack, Akiem Hicks, and company in a must-win game will provide a tough challenge for the Green Bay offensive line.

So, it will be interesting to see how clean the pocket is for Rodgers going forward, and the Packers’ hopes to make a deep playoff run may simply rely on No. 12 to make incredible plays consistently.