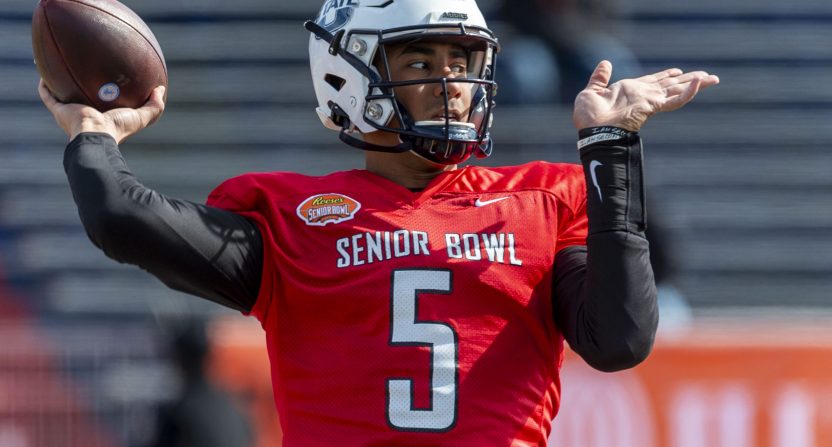 Green Bay traded up from the No. 30 pick to get the No. 26 pick from Miami, and selected the Utah State quarterback.

A QB to Green Bay?!⁰⁰

With the 26th pick in the #NFLDraft, the Packers select Utah State’s Jordan Love. pic.twitter.com/vSxUwWtpOZ

In what is a pretty incredible factoid, it’s the first time the Packers have selected a skill position player in the first round since… they took Rodgers in 2005.

Jordan Love is the first skill position player picked by the Packers in the 1st round since Aaron Rodgers in 2005.#NFLDraft pic.twitter.com/b8c5a9uXOk

And Rodgers would’ve surely preferred a skill position player — like a wide receiver opposite Davante Adams — that can help him immediately, rather than a quarterback being groomed to be his replacement.

This is a Packers team that went 13-3 in 2019, but had some clear flaws that were exposed twice by the San Francisco 49ers. You’d have to think Rodgers would be in favor of the Packers doing everything to fix those issues, and try to win another Super Bowl while he’s still playing/has much left in the tank.

But the Green Bay organization also needs to think long term, and be real about the future of Rodgers. While he’s still good and highly efficient, he’s not the elite player of a few years ago, and his physical skills will continue to diminish as he enters his late 30s.

And there’s no doubting Love’s upside. There’s absolutely star ability and a massive ceiling with Love, as he showed with NFL-esque throws featuring excellent velocity frequently at Utah State, to go with the protoypical quarterback size (6’4″, 224 pounds) and quality athleticism (4.74 40-yard dash).

However, Love also led the FBS with 17 interceptions in 2019. He’s extremely raw, and he has a long way to go to be close to a startable quarterback in the NFL. He’s your classic boom-or-bust prospect. There may not be a quarterback with more upside in the entire draft, but it’s entirely possible he ends up closer to NFL.com’s Lance Zierlein has scouting report comp: Blake Bortles.

Now, the chances Love reaches his potential are higher if he gets the proper coaching and support from the current starting quarterback. Rodgers got to learn behind a Hall of Fame quarterback for three seasons, and Love is presented with a similar situation.

Will Rodgers embrace the opportunity and serve as a mentor to Love in the coming seasons? That remains to be seen. But in the short term, Rodgers probably isn’t too happy about the organization’s choice with the first-round pick.