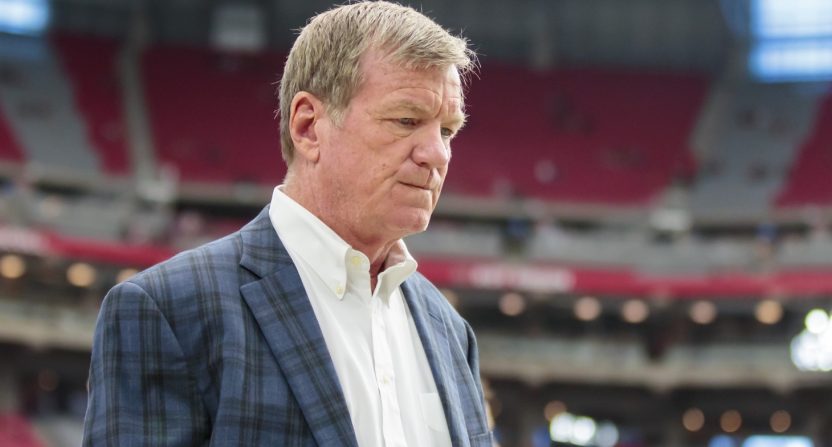 Add the Carolina Panthers to a growing list of NFL teams now looking for a new general manager.

As first reported by NFL Network’s Ian Rapoport, the Panthers have fired GM Marty Hurney. Carolina is currently 4-10 after a Week 15 loss to the Green Bay Packers with games remaining versus the Washington Football Team and New Orleans Saints. According to the team, the search for a new GM will “begin immediately.”

Keeping Hurney as general manager was a curious choice with the Panthers hiring Matt Rhule to be their new coach before this season. Typically, the GM picks the coach. Or the incoming coach has input on a personnel executive while holding control over roster decisions. Yet team owner David Tepper kept Hurney, perhaps wanting to see if he and Rhule could work together.

Rhule will be involved in the search for a new GM to ensure the “alignment” between coach and executive in successful organizations, according to Tepper.

Hurney is in the final year of his contract, which was set to expire in June. The outgoing GM had been with the Panthers organization since 1998 and became GM in 2002. He was removed from the role in 2012 in favor of Dave Gettleman but returned to the position after Gettleman was dismissed.

Tepper made it clear in the Panthers’ official statement that he expected more from the 2020 team despite Rhule taking over as a first-time NFL head coach after leading college programs at Temple and Baylor for the previous seven seasons. (Rhule had coached in college since 1998, except for one season as an assistant with the New York Giants in 2012.)

“This team could easily have another four wins,” said Tepper. “The eight games that we had the ball last to win or tie — seven to win, one to tie — if you win four of those games, you’re in a totally different position right now with this young team. So looking at next year, I’m very hopeful where we will be and what we will do.”

That assessment seems a bit harsh considering the roster turnover Carolina initiated. The team moved on from established veterans like quarterback Cam Newton and tight end Greg Olsen, while linebacker Luke Kuechly retired. A new offense was installed, led by offensive coordinator Joe Brady and quarterback Teddy Bridgewater. And star running back Christian McCaffrey has only played three games this season due to ankle, shoulder, and thigh injuries.

Related: Tis the season for Louis Riddick to interview for NFL GM jobs