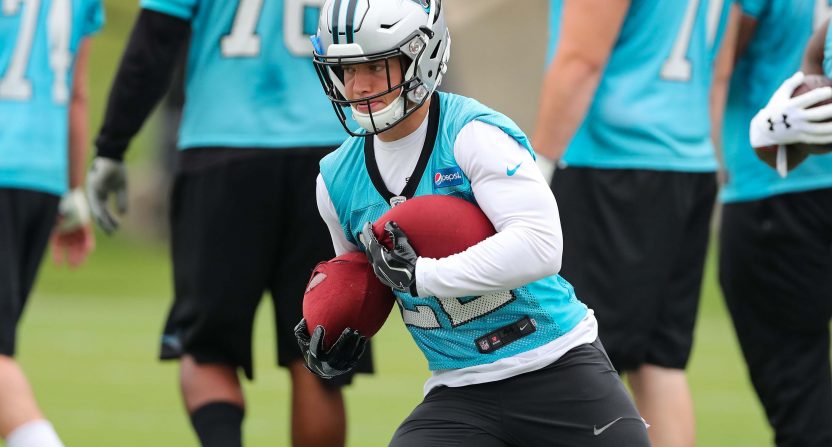 If you’re playing fantasy football this year, some comments made by Carolina Panthers head coach Ron Rivera on Christian McCaffrey may have the running back shooting up your pre-draft rankings. On Tuesday, Rivera told ESPN that he wouldn’t be surprised if McCaffrey got 200 carries in 2018, after getting 117 carries in 2017 (McCaffrey’s rookie season).

But coach Ron Rivera told ESPN.com he wouldn’t be surprised if McCaffrey reached 200 carries in his second year after having only 117 a year ago.

That was followed by Rivera saying on Wednesday that it would be “ideal” to get McCaffrey 25-30 touches per game in 2018:

Panthers coach Ron Rivera said getting Christian McCaffrey the ball 25-30 times per game would be "ideal."

Let’s start with the 200 carries talk. In 2017, 17 running backs had at least 200 carries. It happens, but it’s asking a lot, especially at a position asking for injury. And especially when the running back gets as many receptions as McCaffrey does (80 receptions on 117 targets in 2017). Do the math on 200 carries over 16 games and it’s 12.5 carries/game, but you also can’t trust a running back to stay healthy for 16 games. McCaffrey was able to play all 16 games in 2017, but he only had at least 13 carries in a game twice and averaged just 7.3 carries per game. So asking him to do this on average for all 16 games seems like quite the jump. And he averaged just 3.72 yards per carry last season, so he’ll probably need to see an improvement in production for the Panthers to actually want to hand the ball off to him frequently.

There’s also the issue that the Panthers signed C.J. Anderson in the offseason. And Anderson was one of those 17 players that had over 200 carries in 2017, running for 1,007 yards on 245 carries (4.1 avg). With McCaffrey in the picture, it’s quite unlikely Anderson gets that much run for Carolina, but he’s surely going to be a factor in the backfield and see his fair share of playing time.

So, while the 200 carries statement isn’t necessarily ludicrous, it still seems highly unlikely and shouldn’t at all be something to expect as a fantasy football owner or Panthers fan. What does seem absurd is the 25-30 touches a game statement.

ESPN.Com’s David Newton has more on how crazy this seems and how unusual this year-to-year leap in touches would be:

That would be rare for a back to make such a jump from his first to second season. According to ESPN Stats & Information, only a handful of backs have reached 25 touches per game in the second season period since 2001 and the jump was not close to what McCaffrey would have to make.

The biggest jump was New Orleans’ Deuce McAllister, who played behind workhorse Ricky Williams during his rookie year of 2001. McAllister went from 1.9 touches as a rookie to 24.8 in his second season.

Rivera’s statement is essentially saying that the McCaffrey will get touches on 40%+ of the Panthers’ plays. This is a team with Cam Newton at quarterback; Newton had 139 carries himself in 2017 for an average of 8.69 carries per game. The idea of McCaffrey getting this many touches in the Panthers’ is nowhere close to realistic, regardless of how “ideal” Rivera considers it.

Now, odds are McCaffrey does see a jump in carries and touches, especially to start the year. Rivera clearly views this as a priority and he’s the head coach after all; he’s going to make sure McCaffrey is a huge part of the offense early on. How much the second-year back is used later in the year will likely depend on how well he’s been playing, particularly in the rushing department.

So, expect for McCaffrey see an increase in touches, but don’t look for it to be anywhere near the level Rivera is trying to tell us.