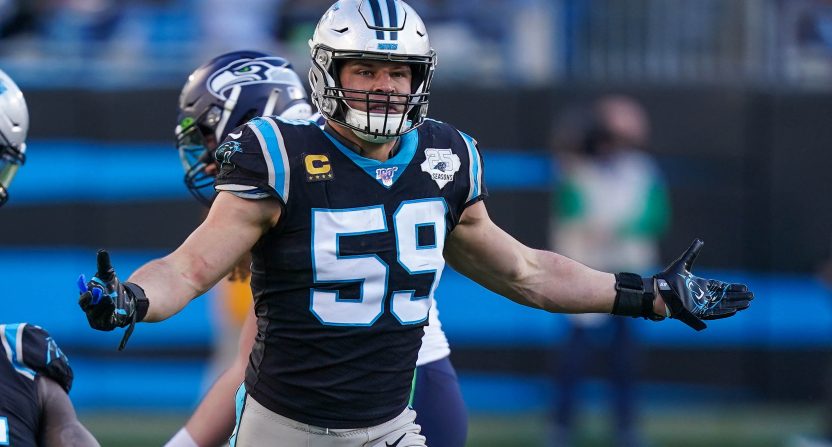 Luke Kuechly was one of the best linebackers of the past decade, making the Pro Bowl in seven of his eight years in the NFL with the Carolina Panthers.

He ultimately decided to retire in his prime at the age of only 28 years old, citing health concerns as the reason for his abrupt decision in 2020.

While Kuechly was finished playing, it was clear that he wanted to stay around the sport. He took a scouting job with the Panthers in the 2020 NFL offseason.

But Kuechly abruptly left that role in Carolina last offseason, hinting that there are other things that he wanted to cross off his bucket list. He will now be able to cross yet another accomplishment off that list this upcoming season.

Reports have indicated that Kuechly will now be taking a new role with the Panthers, and it will be on the media side of sports this time around.

Kuechly is returning to the Panthers organization to be part of the radio broadcast for the team for “several games” this upcoming season.

All-Time great LB Luke Kuechly is returning to the #Panthers organization to be part of this year's radio broadcast for several games. https://t.co/n1Dk3JTY4Z

Many were excited reading the first part of Rapoport’s tweet, only to be upset to hear that Kuechly wasn’t returning to the football field.

That moment you think one of best is coming back…….. https://t.co/2jBYCUZWC8

Lol I bet the beginning of this tweet fooled many people https://t.co/n0V0lxxiJH

While he is remaining retired from the NFL, many Panthers fans are excited to hear that Kuechly will be putting his excellent football mind to use in the broadcast booth.

Luke Kuechly is great for football! The game definitely misses him on field https://t.co/CWnBiFu1lZ

Luke Kuechly calling games for the Panthers is hopefully a step towards a national job.

The pre-snap prophesying could be something special.

Kuechly will be joining play-by-play announcer Anish Shroff along with former Panthers players Jordan Gross and Jake Delhomme in the broadcast booth.

This is the latest former player to take a role in media, something that has been more and more prevalent over the years.

While many would be more excited to see Kuechly back on the football field for Carolina, he will surely provide some great insight for Panthers fans while in the booth this upcoming season.