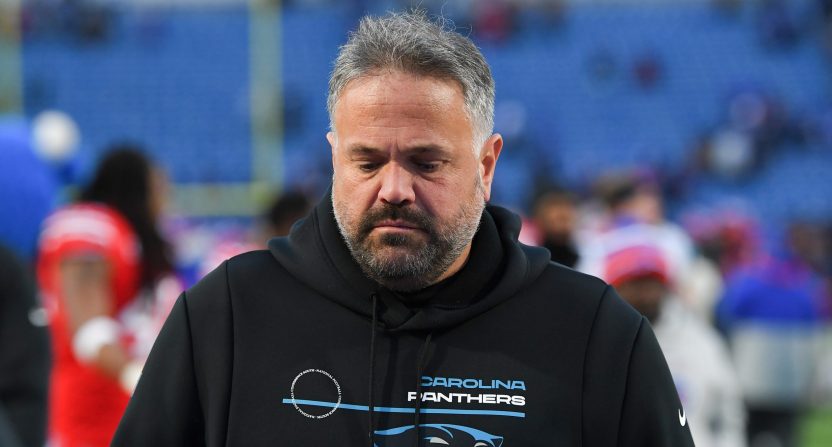 It has been a rough time thus far for Carolina Panthers head coach Matt Rhule, winning only five games in each of the last two seasons for the organization. He appears to be on the hot seat as the team’s head coach, and his actions on Saturday won’t garner any support when it comes to the players on his team.

A story from Panthers training camp has gone viral on Saturday when it was reported that Rhule punished the Panthers offense after a celebration from wide receiver Rashad Higgins following a touchdown pass from newly acquired quarterback Baker Mayfield in practice.

Higgins did a “roll out the red carpet” celebration after catching the touchdown pass from Mayfield, which clearly struck a nerve with Rhule, who proceeded to stop practice and make the entire Panthers offense run sprints.

Baker Mayfield hit Rashard Higgins on a deep post TD. Offense was geeked. Higgins rolled out the red carpet. But he was flagged for taugnting. Matt Rhule stopped practice, yelled at everyone and made offense run

It certainly seems to be a bit extreme to punish players for getting excited about a big play during a practice, and many have taken to social media to criticize Rhule for this decision.

No fun practice in no fun league https://t.co/urVLxYkDMu

Meanwhile in Carolina… Matt Rhule is the president of the No Fun League https://t.co/Dv6wpXU6gA

Matt Rhule not having it today. https://t.co/Gyqu9288fa

Matt Rhule can kindly get off my lawn. https://t.co/6wCtU8CHNA

The NFL has commonly been referred to as the “No Fun League” as the league has gotten more harsh with their “excessive celebration” penalties, but this has reached a whole new level with Rhule getting mad about a celebration in practice.

In his defense, he could be preparing his team for how referees will see that type of celebration by dissuading that type of thing in practice, but it still seems very extreme.

If the Panthers don’t show some improvement this upcoming season, Rhule could be on his way out of Carolina, and it appears his approach to improving team production is by embracing the No Fun League mantra and running a strict regime.