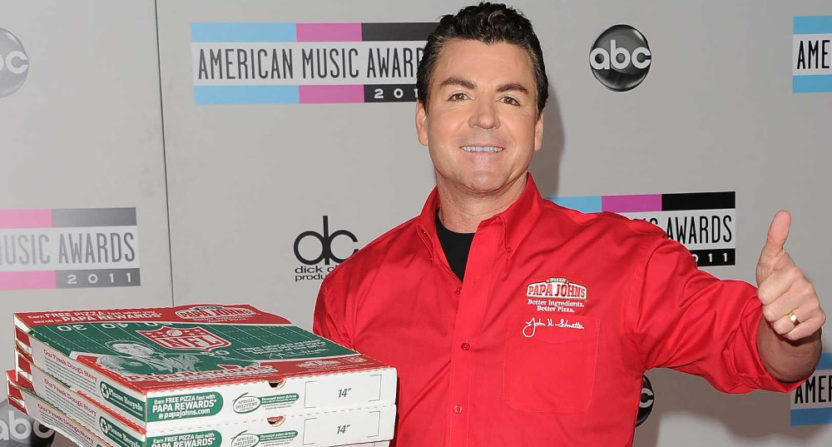 Almost two full weeks ago on Nov. 1, executives from the Papa John’s pizza chain went on an earnings conference call and criticized NFL leadership for not stopping players’ protests during the national anthem, blamed those protests for their deteriorating sales, and said they had pulled much of their present NFL advertising in exchange for future ad spots.

Papa John’s was then subsequently and repeatedly dunked on by rival pizza chains, by frozen pizza chains, by reporters who pointed out that the NFL likely wasn’t the problem, and by the internet in general, and they then even had to disavow support from white supremacists. But the controversy had largely died down, until for some reason Tuesday, the chain’s official social media account decided to post a series of tweets discussing their earnings call comments and apologizing “to anyone that thought they were divisive”:

The statements made on our earnings call were describing the factors that impact our business and we sincerely apologize to anyone that thought they were divisive. That definitely was not our intention. (1/3)

We believe in the right to protest inequality and support the players’ movement to create a new platform for change. We also believe together, as Americans, we should honor our anthem. There is a way to do both. (2/3)

We will work with the players and league to find a positive way forward. Open to ideas from all. Except neo-nazis — ?those guys. (3/3)

What’s worse, making that kind of a non-apology in the first place (it’s not even admitting they did anything wrong, but apologizing if people “thought they were divisive” for making obviously-divisive comments), or waiting two weeks to make it? Either way, it led to the chain again getting repeatedly dunked on:

I really didnt need to know your organization was a alt right racist hate mongering failure to not eat your pizza. It actually really sucks. No shit i would rather eat the carboard covered in cheese at Chuck E Cheese. Enjoy bankruptcy. Bye Felicia

I believe that your pizza makes an excellent spackle when blended vigorously. https://t.co/R7GBNhg9HI

Your pizza sucks ass. The internet never forgets your posts. You don’t reply to comments submitted via your website. Why should anyone buy this? Keep your nazis, they’re all ya got now.

Papa Johns with the horribly late and desperate attempt to fix their image. The players don’t need you to work with them. It’s not about them. So go blame your lack of earnings on your lack of quality and poor advertising.

Somehow, it doesn’t seem like this is going to win many back. Worse apologies, worse timing, Papa John’s. They should have just stuck with Jerry Jones rapping:

2 thoughts on “Papa John’s tweets non-apology to those who thought NFL comments were “divisive,” two weeks after the fact”