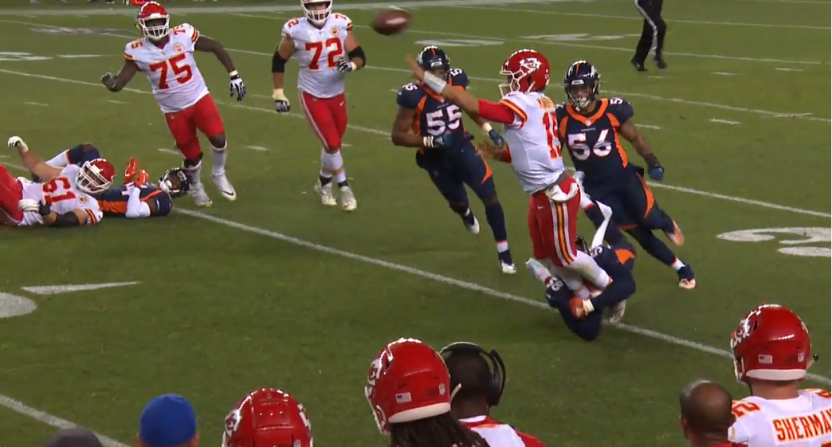 The Kansas City Chiefs erased a 10-point deficit in the fourth quarter to get an impressive 27-23 road victory over the Denver Broncos on Monday Night Football.

Kansas City quarterback Patrick Mahomes entered Monday night as arguably the NFL MVP favorite, and he certainly showed why in the second half (screencap via ESPN’s SportsCenter with SVP): 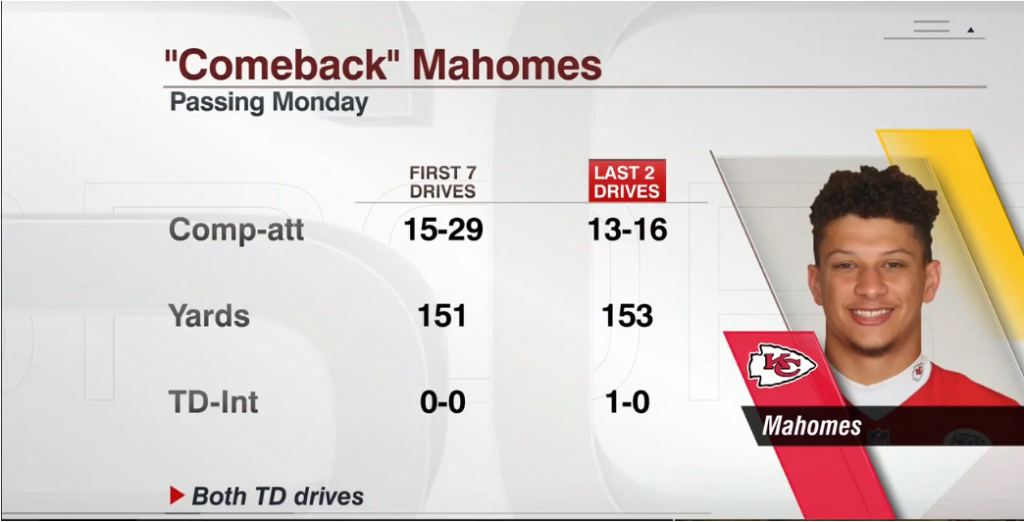 But it was the Chiefs’ final drive where Mahomes really showed off his talents and improvisational skills.

The Chiefs faced a 3rd-and-5, trailing Denver 23-20 with just over three minutes to go in the fourth quarter, when Mahomes evaded pass-rushing menace Von Miller and threw a pass *left-handed* to Tyreek Hill for a first down. ESPN play-by-play man Joe Tessitore was amazed, for good reason.

Well, the Chiefs looked to be in trouble again when they had 2nd-and-30 two plays later, but Mahomes rolled to his right and fired a 23-yard rocket.

Kansas City running back Kareem Hunt capped off the drive with this four-yard go-ahead touchdown with 1:39 remaining, and dealt with some unfriendly Broncos fans:

But the Broncos had a good drive going, and it appeared they may respond with a touchdown to take the lead back in the final 20 seconds. The Broncos had 3rd-and-10 at the Kansas City 28-yard line, when Demaryius Thomas was wide open down the right sideline. And Case Keenum flat-out missed him, horribly. This should be an easy six:

everyone is gonna talk about the hook and ladder when Case Keenum should have hit this pic.twitter.com/U7pwfAo5na

The hook and ladder playcall is going to let Case Keenum off the hook for the worst missed throw of the season so far. pic.twitter.com/ErhkLmrdTm

And you’ll notice a hook and ladder (or hook and lateral) was mentioned in those two tweets. That was the ensuing play. On 4th-and-10, Broncos wide receiver Courtland Sutton was set to have a first-down reception, but chose to lateral the ball… which failed miserably. Tessitore couldn’t believe it:

Gutsy call with the hook and ladder at the end 😳 pic.twitter.com/UyhaRtMMH5

Now, the Broncos were out of timeouts, and he was getting tackled with about 11 seconds remaining and the clock running. Denver could’ve probably hurried up, spiked the ball, and gotten another play off, but we’re still talking probably only one more play from the 20-yard line. Odds are the Broncos don’t turn that into a touchdown (but there’s still a chance, of course). And maybe that lateral actually results in a touchdown if executed properly.

Tessitore referred to the finish as “utterly outrageous.”

The 4-0 Chiefs remain the only undefeated team in the AFC. The loss drops the Broncos to 2-2, and thus two games behind Kansas City in the AFC West.