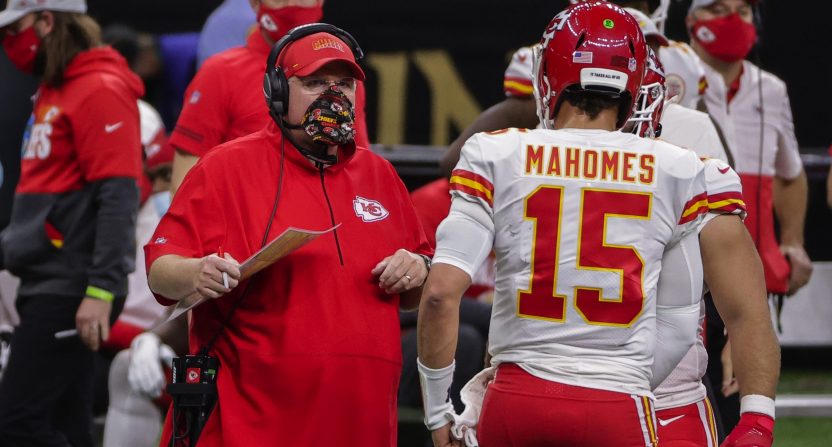 Doesn’t matter. Both are already Hall of Famers.

With two Super Bowl appearances, a Super Bowl MVP award, a regular-season MVP honor, and the highest regular-season and playoff passer ratings in NFL history, Mahomes could walk away right now with accolades worthy of a spot in Canton.

And with three Super Bowl appearances, a ridiculous eight conference championship game appearances, one ring as a head coach in Kansas City, and another as an assistant with the Green Bay Packers, Reid has done enough. He’s also the sixth-winningest regular-season head coach and the fourth-winningest playoff head coach in NFL history, and every coach with more wins than him is already either in the Hall of Fame or named Bill Belichick.

If the Chiefs win as expected, Mahomes will join this list of multiple Super Bowl winners with an MVP: Brady, Manning, Bradshaw, Montana, Starr. That’s right, he’d be in a group of six. Just four years into his career. If he wins Super Bowl MVP honors again and your filter for that, the group shrinks to five without Manning.

Meanwhile, Reid can move behind only Belichick, Tom Landry, and Don Shula on the all-time playoff wins list. He’d leapfrog Landry and Shula with just one more playoff run, but that’s already Canton-worthy, especially if he secures a second ring as a head coach in Super Bowl V.

He’s already just the 12th coach to make three Super Bowls, and he’d become the 14th to win two. Throw in a Coach of the Year award, that 221-130 career record, and his reputation as an offensive innovator, and the 62-year-old Reid’s candidacy is a no-brainer regardless of what he does beyond this point.

The only question now is how much more both can accomplish (a lot), and whether they’ll both be first-ballot entries (very damn likely).