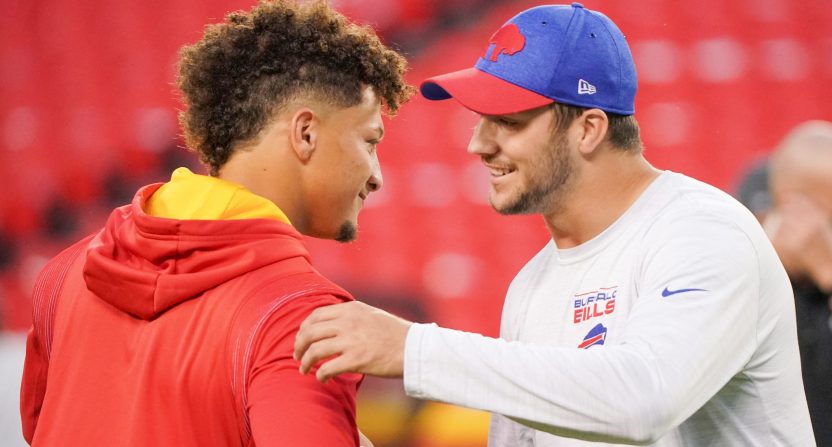 The Buffalo Bills and Kansas City Chiefs will battle it out for the second time this season on Sunday. While the first matchup was won by the Bills in Week 5, this showdown in the NFL Playoffs Divisional Round will have a bit more weight to it.

The Chiefs are hoping to return to the AFC Championship Game for the fourth year in a row. They’ll have to beat the team they defeated in last year’s AFC finale in order to get there. And that means they’ll have to find a way to neutralize Josh Allen.

The Buffalo quarterback threw for 315 yards and three touchdowns while also rushing for 59 yards and a score in their first meeting this season. He’s also coming off his best game of the season, in which he completed 21-of-25 passes for 308 yards and five touchdowns in Buffalo’s 47-17 shellacking of the New England Patriots.

Kansas City quarterback Patrick Mahomes is no slouch himself but he has very high praise for the work that Allen has done in Buffalo and what he means to that franchise.

“Yeah he’s a tremendous player,” Mahomes said Wednesday. “I actually know him a little bit off the field as well, great dude. They put a lot on his shoulders, and he rises to the occasion. He’s able to run the ball, he can throw the ball, he has the arm strength to throw it anywhere on the football field and he makes great decisions. Like you said we’ll probably play them a lot of times, it’ll be great competition and it’s definitely a great challenge for us as a team to compete with them.”

Mahomes already has a Super Bowl title under his belt, something that Allen would love to acquire. If this is going to be the year, he’ll have to lead the Bills to victory over the Chiefs when it matters most. We’ll find out if Allen can get it done on Sunday.