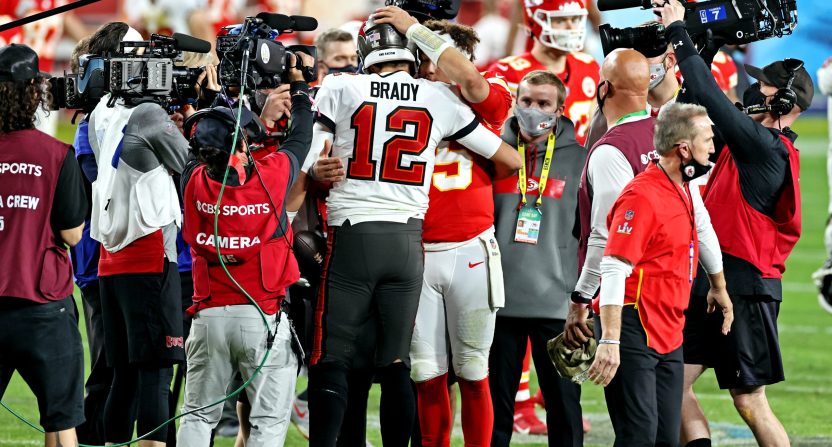 This week saw Patrick Mahomes and the Kansas City Chiefs defeat Tom Brady and the Tampa Bay Buccaneers on Sunday Night Football, 41-31. That was a rematch of their Super Bowl LV matchup, which Brady and the Bucs won 31-9..

Mahomes finished the game with 37 pass attempts for 23 completions and 259 yards, with three touchdowns and an interception. One of those touchdown passes came on a trademark Mahomes-style scramble. The quarterback added 34 yards rushing on the ground, as well as stone-cold acting during a wild trick play.

Brady completed 39 passes on 52 attempts for 385 yards and three touchdowns in the loss.

After the game, many fans wondered—as they did after Super Bowl LV—if this is the last time we would see Mahomes and Brady, the greatest quarterbacks of their generations, face each other on the gridiron.

For his part, Mahomes joked about having déjà vu, saying he’s played his “last game against Tom Brady” at least four times.

Here are the results of every Mahomes-Brady matchup before last night, via NBC Sports:

Last night’s result moved the all-time series to 3-3, though Brady would be quick to note one of his victories came in a Super Bowl against Mahomes. Maybe the Kansas City quarterback will get another chance to redeem himself if the Bucs and Chiefs both make Super Bowl LVII.