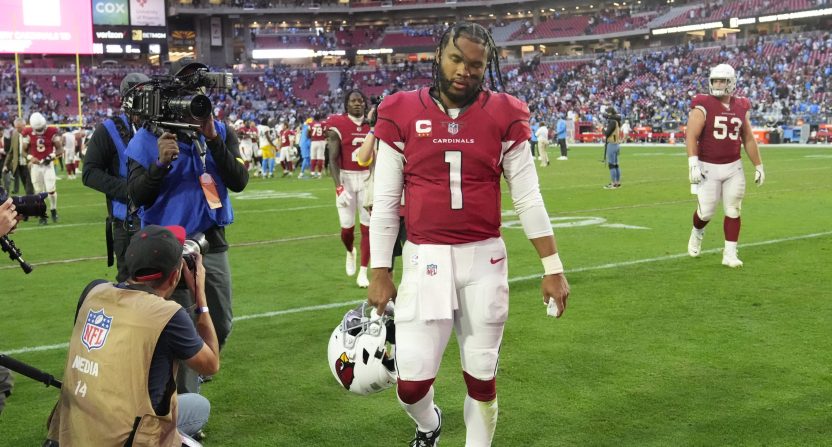 The Arizona Cardinals have been a complete mess this season, currently sitting at just 4-8 on the season. There has been plenty of criticism to hand around, but former Cardinals cornerback Patrick Peterson seems to believe a large portion of it should fall on quarterback Kyler Murray.

Peterson — now on the Minnesota Vikings —  discussed his former team’s struggles on the “All Things Covered” podcast Wednesday and did not mince words on how he felt about Murray.

Patrick Peterson comments on what's going on with his former team the Cardinals, since they are always in the news.

Peterson played with Murray in Arizona for two seasons, and it doesn’t seem like the two players are on the best terms at the moment.

Murray was made aware of Peterson’s claims about him, responding to a tweet about the situation and publicly denying it.

“This isn’t true… You on some weird s— Patrick,” Murray tweeted. “You got my number, if you really felt like this as a “big bro” or “mentor” you supposed to call me and tell me, not drag me so your podcast can grow…”

It’s unclear exactly where Peterson’s beef with Murray began, but this disagreement between the two certainly has many around the NFL world talking.

I propose we solve the Kyler Murray vs Patrick Peterson beef the only way I believe it should be:

With an epic rap battle.

Pat P been doing a lot of talking. Anybody from the Cardinals going to clap back? Anybody going to stick up for Kyler Murray? Hmmmm https://t.co/I5baAzL8m3

It certainly seems like someone will take the fall in Arizona for this disaster of a season.

Considering the organization committed to Murray long-term with a massive contract extension last offseason, it’s unlikely to be him.

That leaves head coach Kliff Kingsbury as the likely fall guy, which Peterson also detailed in his interview.

“Ain’t no maybe. He will be,” said Peterson when asked if Kingsbury will be a “scapegoat”. “The crazy thing about it, the guy who hired him will still have a job.”