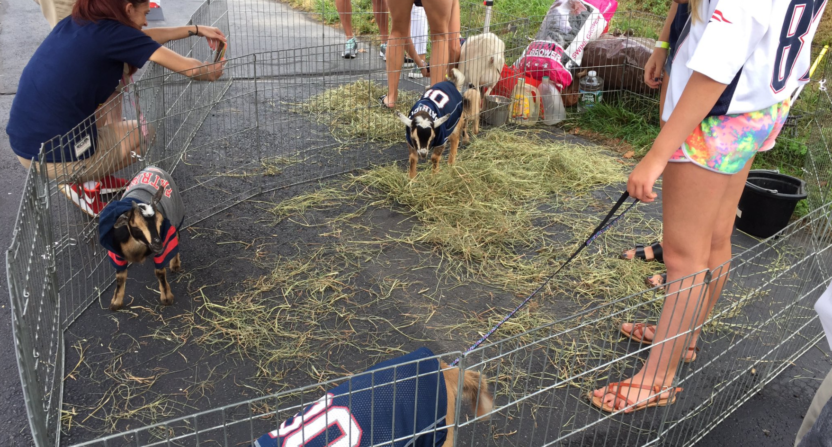 Tom Brady became a quadragenarian today, but that’s only one of his titles. Another is G.O.A.T., or greatest of all time, a status he cemented with a mind-blowing comeback against the Falcons to win Super Bowl LI. Madden is even launching a special G.O.A.T edition of its upcoming game, although Brady himself feels legendary 49er Joe Montana still had a better career.

So it was only naturally that the Pats welcomed Brady to his 40s by bringing some real, live goats to training camp on Thursday.

We invited some of Tom's friends to #PatsCamp today to help celebrate his birthday! pic.twitter.com/tr2xLVCHVy

More baby goats at camp as club celebrates Tom Brady's 40th birthday with what they call "G.O.A.T.S. – The Greatest Petting Zoo of All Time" pic.twitter.com/kAnfR4FQpv

And for anyone who couldn’t pick up on the joke, the Patriots put a giant “G.O.A.T.” sign on the grounds.

On Tom Brady's 40th birthday, the Patriots are offering fans a G.O.A.T. photo opportunity at training camp (yes, that is a live baby goat). pic.twitter.com/FC8g1AoNNf

Sure, it’s a total ripoff of when the Phoenix Mercury held a similar celebration for WNBA all-time leading scorer Diana Taurasi last month. But it’s adorable, so who’s complaining?

The Patriots went all out to get fans involved in the celebration. They invited fans to write birthday wishes to Brady on a giant card, and then they went around asking kids how old they think Brady is, eliciting all sorts of responses.

How old is Tom Brady (according to kids)?! pic.twitter.com/MoJ1yyJDMf

40 is old for an NFL player, but Brady hopes to play for at least six more years.

Now let’s see if the Pats invite a bunch of weasels for Belichick’s birthday.